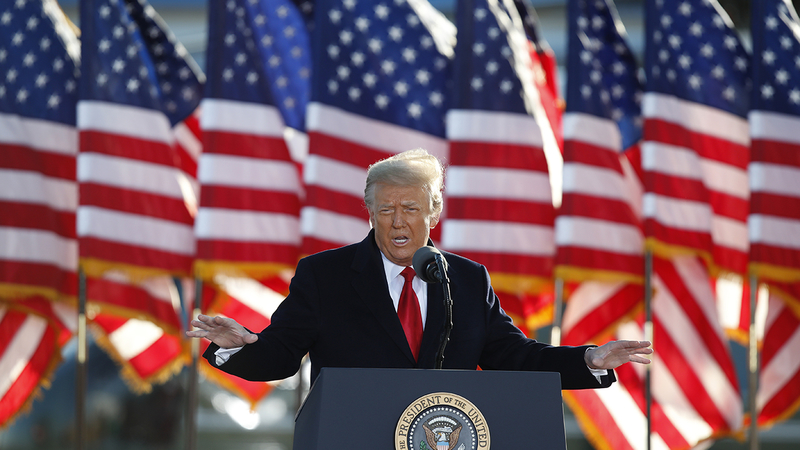 Former President Donald Trump on Tuesday unveiled a new blog on his personal website, "From the Desk of Donald J. Trump."

The announcement came a day before Facebook's quasi-independent Oversite Board voted to uphold Trump's ban from the social media platform. His account was suspended in January for inciting violence that led to the fatal riot at the Capitol.

Trump's new web page features a dramatic video that claims, "A BEACON OF FREEDOM ARISES" and hailing "A PLACE TO SPEAK FREELY AND SAFELY." Yet the page is not much more than a display of Trump's recent statements - available elsewhere on the website - that can be easily shared on Facebook and Twitter, the platforms that banished him after the riot.

After Fox News touted the page as a "new communications platform," some people on Twitter, like The Daily Beast's Andrew Kirell, pointed out: "This is called a 'website.'"

"This 'new communications platform' is literally just a blog roll on his website next to a link to donate money," CNN's Jon Passantino tweeted.

The Trump supporter tells the I-Team he infiltrated a group of activists in Sonoma County who call themselves anti-fascist, and he gave us what he says is their "target list" and recordings of their planning sessions.

While Trump aides have spent months teasing his plans to launch his own social media platform, his spokesman Jason Miller said the blog was something separate.

"President Trump's website is a great resource to find his latest statements and highlights from his first term in office, but this is not a new social media platform," he tweeted. "We'll have additional information coming on that front in the very near future."

Barred from Facebook, Twitter and YouTube, Trump has embraced other platforms for getting his message out. He does frequent interviews with friendly news outlets and has emailed a flurry of statements to reporters through his official office and political group.

Trump has even said he prefers the statements to his old tweets, often describing them as more "elegant."