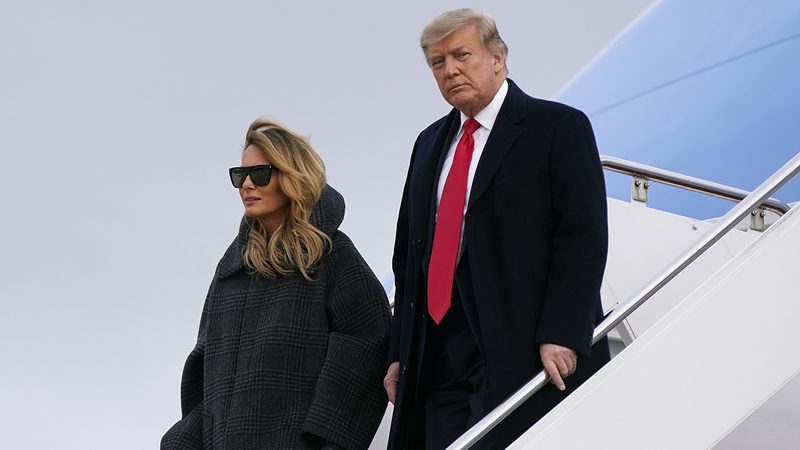 Trump, on tape, presses Ga. official to 'find' him votes

ATLANTA -- The Georgia Secretary of State's office has formally launched an investigation into former President Donald Trump's phone calls to state election officials in which he sought help to overturn the results of the election after President Joe Biden's narrow victory was certified twice.

The investigation, which follows a series of formal complaints filed by a law professor alleging that Trump violated the law during those calls, marks the first formal investigation into Trump's efforts to overturn the results of the election in the state.

"The Secretary of State's office investigates complaints it receives," said Walter Jones, a spokesperson for Secretary of State Brad Raffensperger's office. "The investigations are fact-finding and administrative in nature. Any further legal efforts will be left to the Attorney General."

In Trump's first call to Georgia officials, made in December amid an ongoing audit, he had asked a chief investigator in Raffensperger's office to "find the fraud," telling them they would be a "national hero" for it, according to an individual familiar with the matter. In another call on Jan. 2, Trump repeatedly demanded that Raffensperger "find" the exact number of votes -- 11,780 -- he needed to be the victor in the Peach State, according to a recording of the call obtained by ABC News.

Once the investigation is finished, the board will vote whether or not to send a criminal referral to the state attorney general or district attorney.

Fulton County's top prosecutor, District Attorney Fani Willis, has described the Trump-Raffensperger call as "disturbing," saying in a statement after the calls first became public that if election officials refer the case to her, she'll pursue it aggressively.

"As I promised Fulton County voters last year, as District Attorney, I will enforce the law without fear or favor," Willis said in a Jan. 4 statement. "Anyone who commits a felony violation of Georgia law in my jurisdiction will be held accountable. Once the investigation is complete, this matter, like all matters, will be handled by our office based on the facts and the law."

She could also decide on her own to pursue a probe, her associates said.

"I know D.A. Willis, and she will move it as fast as possible, but she's not going to move it forward just to satisfy anyone, Democrat or Republican," said Joshua D. Morrison, former senior assistant Fulton County district attorney and Willis colleague.

Morrison said he believes it is likely Willis will investigate the Trump calls, even though her office has given no official indication that it is preparing to do so.

"I have never seen anything like this," Morrison said of the call. "And people in Georgia don't like to be messed with. So I don't think Trump is going to find a friendly audience here if they do decide to go forward on this case."

"I am very happy the Secretary of State's office has opened an investigation into this matter, as I have been calling for since early January. I look forward to reviewing their report and deciding whether to refer the case to the Attorney General or District Attorney," David Worley, the lone Democrat on the State Election Board, told ABC News.

Investigations by the State Election Board can take months to complete, but it marks a major development on the eve of Trump's second impeachment trial. The single article of impeachment against the president, which accuses him of inciting the deadly riot at the Capitol on Jan. 6, briefly mentions the phone call with the secretary.

Trump's impeachment lawyers defended Trump's actions on the call in a brief submitted to the House the last week and "denied that President Trump acted improperly in that telephone call in any way."
Trump also defended his call while speaking at a rally in D.C. on Jan. 6. "I thought it was a great conversation," he said. "People loved that the conversation."

"I can't believe this guy is a Republican," Trump said, referring to Raffensperger. "He loves recording telephone conversations."

"Many prominent and knowledgeable attorneys have concluded ... that the evidence which is now currently and publicly available already meets the very high criminal standard of proving each and every element of the crimes beyond any reasonable doubt," Banzhaf wrote in the complaint, which was his fourth one submitted.

Anyone is able to file a complaint with the elections division of the secretary's office, Raffensperger's office told ABC News. If the complaint is deemed credible, it will be investigated.

Banzhaf filed the complaint through an online portal on the secretary's website, the spokesperson said.

The emailed complaint was sent to the board, Willis and Georgia Attorney General Chris Carr. Banzhaf asked the board to adopt a motion to refer a criminal investigation to Carr and Willis's offices to pursue.

The five-member State Election Board, which Raffensperger sits on, has investigatory power over "election laws and frauds and irregularities," according to a description of its duties on the secretary's website. If legal violations are discovered, the board must report them to the attorney general or relevant district attorney, who is then responsible for further investigating the matter and prosecution, if applicable.