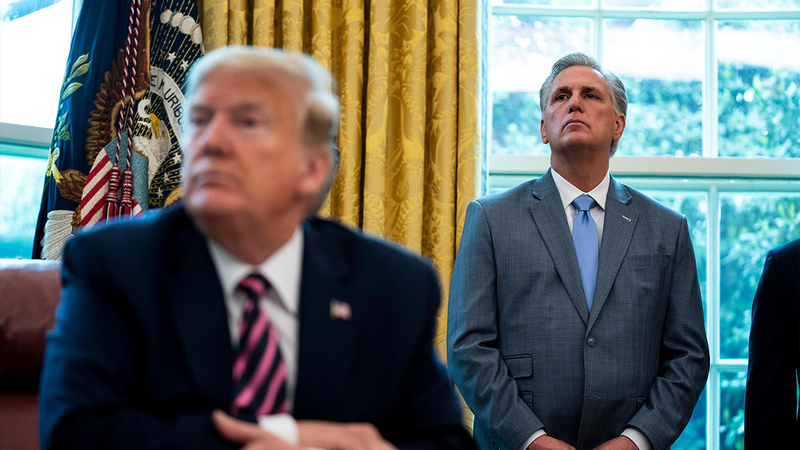 WASHINGTON -- In an expletive-laced phone call with House Republican leader Kevin McCarthy while the Capitol was under attack, then-President Donald Trump said the rioters cared more about the election results than McCarthy did.

"Well, Kevin, I guess these people are more upset about the election than you are," Trump said, according to lawmakers who were briefed on the call afterward by McCarthy.

McCarthy insisted that the rioters were Trump's supporters and begged Trump to call them off.

Trump's comment set off what Republican lawmakers familiar with the call described as a shouting match between the two men. A furious McCarthy told the then-President the rioters were breaking into his office through the windows, and asked Trump, "Who the f--k do you think you are talking to?" according to a Republican lawmaker familiar with the call.

The newly revealed details of the call, described to CNN by multiple Republicans briefed on it, provide critical insight into the President's state of mind as rioters were overrunning the Capitol. The existence of the call and some of its details were first reported by Punchbowl News and discussed publicly by McCarthy.

Senators are poised to vote on whether Donald Trump will be held accountable for inciting the horrific attack at the Capitol after a speedy impeachment trial.

The Republican members of Congress said the exchange showed Trump had no intention of calling off the rioters even as lawmakers were pleading with him to intervene. Several said it amounted to a dereliction of his presidential duty.

"He is not a blameless observer, he was rooting for them," a Republican member of Congress said. "On January 13, Kevin McCarthy said on the floor of the House that the President bears responsibility and he does."

Speaking to the President from inside the besieged Capitol, McCarthy pressed Trump to call off his supporters and engaged in a heated disagreement about who comprised the crowd. Trump's comment about the would-be insurrectionists caring more about the election results than McCarthy did was first mentioned by Rep. Jaime Herrera Beutler, a Republican from Washington state, in a town hall earlier this week, and was confirmed to CNN by Herrera Beutler and other Republicans briefed on the conversation.

"You have to look at what he did during the insurrection to confirm where his mind was at," Herrera Beutler, one of 10 House Republicans who voted last month to impeach Trump, told CNN. "That line right there demonstrates to me that either he didn't care, which is impeachable, because you cannot allow an attack on your soil, or he wanted it to happen and was OK with it, which makes me so angry."

"We should never stand for that, for any reason, under any party flag," she added, voicing her extreme frustration: "I'm trying really hard not to say the F-word."

Herrera Beutler went a step further on Friday night, calling on others to speak up about any other details they might know regarding conversations Trump and Pence had on January 6.

"To the patriots who were standing next to the former president as these conversations were happening, or even to the former vice president: if you have something to add here, now would be the time," she said in a statement.

Another Republican member of Congress said the call was problematic for Trump.

"I think it speaks to the former President's mindset," said Rep. Anthony Gonzalez, an Ohio Republican who also voted to impeach Trump last month. "He was not sorry to see his unyieldingly loyal vice president or the Congress under attack by the mob he inspired. In fact, it seems he was happy about it or at the least enjoyed the scenes that were horrifying to most Americans across the country."

As senators prepare to determine Trump's fate, multiple Republicans thought the details of the call were important to the proceedings because they believe it paints a damning portrait of Trump's lack of action during the attack. At least one of the sources who spoke to CNN took detailed notes of McCarthy's recounting of the call.

Trump and McCarthy did not respond to requests for comment.

It took Trump several hours after the attack began to eventually encourage his supporters to "go home in peace" -- a tweet that came at the urging of his top aides.

At Trump's impeachment trial Friday, his lawyers argued that Trump did in fact try to calm the rioters with a series of tweets while the attack unfolded. But his lawyers cherry-picked his tweets, focusing on his request for supporters to "remain peaceful" without mentioning that he also attacked then-Vice President Mike Pence and waited hours to explicitly urge rioters to leave the Capitol.

U.S. Capitol Police officer Eugene Goodman warned Republican Sen. Mitt Romney that rioters were headed his way shortly after the building was breached by a mob of Donald Trump supporters. Video of their interaction was played during Donald Trump's impeachment trial.

A source close to Pence said Trump's legal team was not telling the truth when attorney Michael van der Veen said at the trial that "at no point" did the then-President know his vice president was in danger.

Asked whether van der Veen was lying, the source said, "Yes." Former Pence aides are still fuming over Trump's actions on January 6, insisting he never checked on the vice president as Pence was being rushed from danger by his US Secret Service detail.

It's unclear to what extent these new details were known by the House Democratic impeachment managers or whether the team considered calling McCarthy as a witness. The managers have preserved the option to call witnesses in the ongoing impeachment trial, although that option remains unlikely as the trial winds down.

The House Republican leader had been forthcoming with his conference about details of his conversations with Trump on and after January 6.

Trump himself has not taken any responsibility in public.