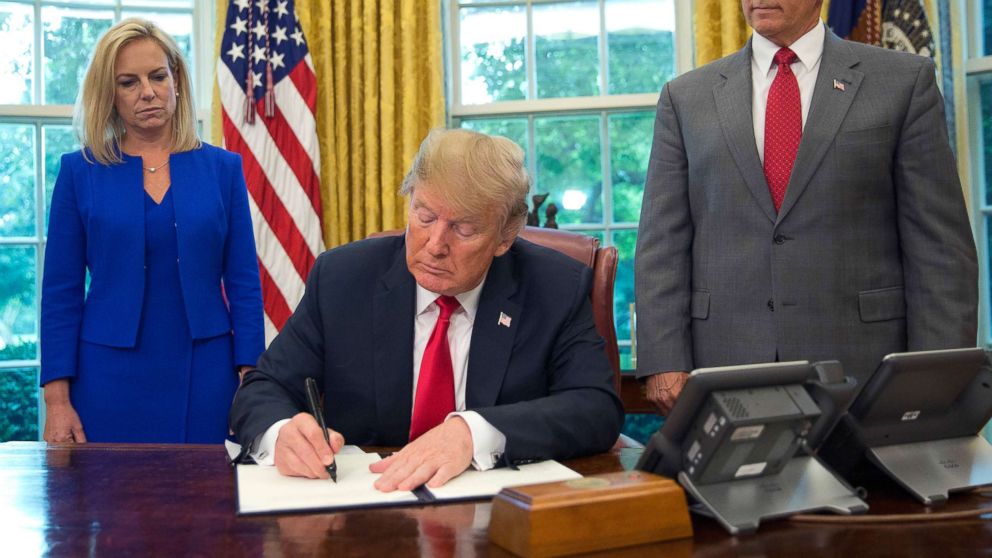 At the end of a particularly acrimonious week, President Donald Trump roiled tensions once again with vacillating rhetoric over the ongoing immigration debate fueled by family separations at the U.S.-Mexico border.

In a stark message to members of his own party on Capitol Hill Friday morning, Trump instructed Republican lawmakers to "stop wasting their time" on a legislative fix for immigration until after the midterm elections in November.

Trump's latest Twitter crusade came after telling members, "I'm with you 100%" during a closed-door meeting Tuesday with House Republicans on immigration," according to a statement from White House principal deputy press secretary Raj Shah.

Later on Tuesday, the president echoed the message on Twitter, urging, "Now is the best opportunity ever for Congress to change the ridiculous and obsolete laws on immigration."

By Friday, frustrated with Republicans in the House of Representatives for failing to pass a conservative immigration bill on Thursday and delaying a planned vote on a GOP compromise measure until next week, Trump launched a rallying cry for his base, calling on voters to "elect more Republicans" to "pass the finest, fairest and most comprehensive Immigration Bills anywhere in the world."

Hoping to repair an immigration system that is said to be "broken" by members of both sides of the aisle, Republican lawmakers aimed to implement legislative reforms that would address the ongoing crisis over the Trump's administration's "zero tolerance" policy after outrage erupted over family separations at the border.

Contending with vote counts wasn't the GOP's only struggle this week, however, as they worked to parse the president's shifting signals and policy pivots.

Trump signed an executive order ending family separations on Wednesday telling reporters: "I didn't like the sight or the feeling of families being separated."

Later that evening, he told a crowd during a rally in Duluth, Minn., "They're not sending their finest. We're sending them the hell back! That's what we're doing."

As questions loomed over how the administration will reunite the more than 2,300 children with their parents who were apprehended after crossing the border and face criminal prosecution, the president said during a cabinet meeting Thursday, "I'm directing HHS, DHS, and DOJ to work together to keep illegal immigrant families together during the immigration process and to reunite these previously separated groups."

"But the only real solution is for Congress to close the catch-and-release loopholes that have fueled the child smuggling industry," he added.

With another tweet Friday morning, Trump again struck a more antagonistic tone on the issue, offering a preview ahead of his remarks at the White House with "angel families" - the loved ones of those killed by undocumented immigrants.

"We must maintain a Strong Southern Border," he wrote. "We cannot allow our Country to be overrun by illegal immigrants as the Democrats tell their phony stories of sadness and grief, hoping it will help them in the elections."

Friday afternoon, Trump spoke at the White House event to show "the other side" of the immigration debate.

Meanwhile, House Republicans on Friday said they would continue intra-party negotiations on an immigration bill despite the president's tweet urging Republicans to "stop wasting their time," with leaders pledging to hold a vote on a measure at some point next week before adjourning for the July 4 recess.

House Majority Leader Kevin McCarthy, R-Calif., said on the House floor that GOP leaders are "taking all ideas in" from members and will continue crafting the bill "through the weekend."

"We're going to have a vote," House Majority Whip Steve Scalise, R-La., the House GOP's top vote-counter, told reporters. "Obviously it's an uphill fight to put that coalition together, we've got our own diverse approaches in the Republican conference."

Scalise said he believed Trump's tweet was expressing "frustration that Democrats have refused to engage in solving the problem."

Other Republicans, grappling once again with the president's fickle approach to legislative matters, were less sanguine.

"Does it make it harder? Yes. Does it make it impossible? No," Rep. Mike Coffman, R-Colo., a moderate who supported bipartisan immigration reform efforts, told ABC News. "We have an obligation to the American people to work on this issue, to give it our best."

Republicans are considering additions to the legislation related to expanding the use of E-Verify - the system allowing employers to check if new hires are legally allowed to work in the United States - and visas for agricultural guest workers, a concern of Republicans in farm districts.

House Minority Whip Steny Hoyer complained that Republicans are not working with Democrats to consider any changes to the bill.

"We're not included," Hoyer, D-Md., said on the House floor. "We're shut out and the compromise has been rejected and undermined."