Tupac Shakur letter reveals why he broke up with Madonna 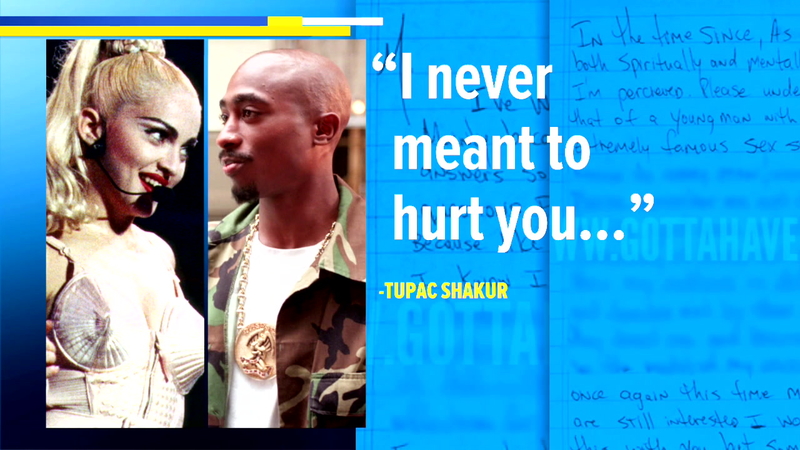 Tupac Shakur letter reveals why he broke up with Madonna

There's a never before seen letter between two music icons that reveals their relationship and how it ended.

Rap legend Tupac Shakur wrote to Madonna from behind bars, indicating that they had their ups and downs.

According to the letter, Shakur ended it with the pop icon because she's white.

Shakur and Madonna dated from 1993 to 1994. Madonna confirmed the relationship during an interview on the Howard Stern Show two years ago.

"I was dating Tupac Shakur at the time and the thing is, he like got me all riled up about life in general, so when I went on his show I was feeling very gangster," she said.

In a three-page confession letter to Madonna, dated Jan. 15, 1995, Shakur wrote that their relationship might have helped Madonna's career but hurt his.

"For you to be seen with a black man wouldn't in any way jeopardize your career, if anything it would make you seem that much more open and exciting. But for me, at least in my previous perception, I felt due to my 'image' I would be letting down half of the people who made me what I thought I was," he wrote. "I never meant to hurt you."

Parts of the letter have been blurred out.

"An interview where you said 'I'm off to rehabilitate all the rappers & basketball players' or something to that effect ... cut me deep," he added. "I had never known you to be with any rapper besides myself," the letter read.

It ends with, "I don't know how you feel about visiting me, but if you could find it in your heart I would love to speak face to face with you."

The letter is now going up for auction on the GottaHaveRockandRoll website on July 19. It will have a starting bid of $100,000 and is expected to sell for triple or quadruple that amount.