A suspect driving a U-Haul truck on shredded tires was arrested in Long Beach following a chase through several Orange County cities.
KABC 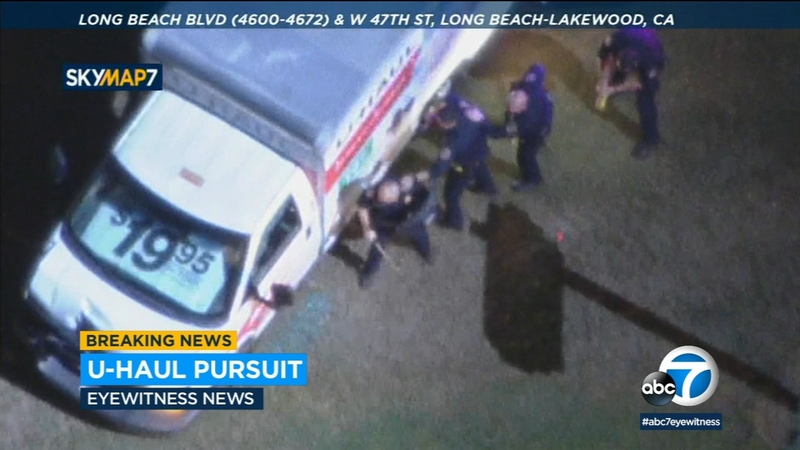 AIR7 HD was over the chase as the suspect drove on multiple freeways and on surface streets through cities, including Seal Beach, Huntington Beach and then in the Santa Ana area.

The suspect drove erratically at certain moments and he continued the chase while an advertising banner blocked the windshield of the stolen U-Haul.

AIR7 HD also captured the driver and passenger tossing things out of the truck's windows.

A short time later another spike strip took out the front tire of the passenger side.

Later on in the pursuit, the suspect suddenly slammed into a metal barricade and had a close call with a black sedan, which quickly backed up to escape a collision.

While driving through a Long Beach neighborhood with two flat tires, the vehicle hit a parked SUV, but kept going, passing several people on the street.

The U-Haul got trapped in a parking lot at a park and for a time was wedged up against a parked car.

Officers approached with guns drawn, but the U-Haul jumped the curb and took off right through the park.

After a short drive, the U-Haul got bogged down in the grass and officers took the driver and passenger into custody after they shattered one of the vehicle's windows.