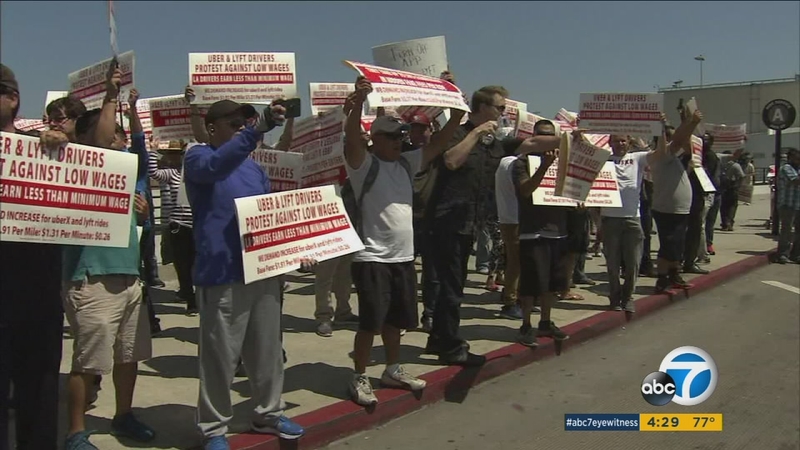 Protesters at the rally, which was organized by Uber and Lyft drivers, said they were holding the demonstration to speak out about their pay being less than minimum wage, which is twice as low as drivers in other big cities such as New York and San Francisco. Many of the people took time away from the steering wheel to send a message to ride sharing companies.

"All we want is an increase in our wages so we can make a decent living," said one protester.

The drivers are asking the Lyft and Uber to raise their salary to $1.91 per mile. That's roughly $1 or more than what they're getting now. Signs held up by protesters slammed the ride-sharing giants of taking up to 50 percent commission.

Just one day before the protest, Uber driver Joann Culligan said she denied a ride because of the cost.

"I probably would've made maybe $14 on that ride, for a 20-mile ride. But it was an hour and a half to take the passenger home," she said.

After we reached out to both Lyft and Uber, Lyft gave a statement that reads in part, "Drivers are an integral part of Lyft's success, and that's why we constantly strive to help them maximize their earnings. We're proud to provide economic opportunities for tens of thousands of drivers in L.A. and hundreds of thousands nationwide."

LAX passengers slowed to view the demonstrations, and some working Uber and Lyft drivers were yelled at for picking up customers. But many of those riders supported the cause.

The protest organizer said they have another event planned in a couple of weeks. Next time, it'll be at City Hall.

Demonstrators said they want their message heard by the L.A. City Council. They want council members to re-examine the city contract for better wages for rideshare drivers in the area.

Some protesting @uber and @lyft drivers are yelling at drivers who chose to work today. Protestors say they want more money pic.twitter.com/N4lFAqyQ3D