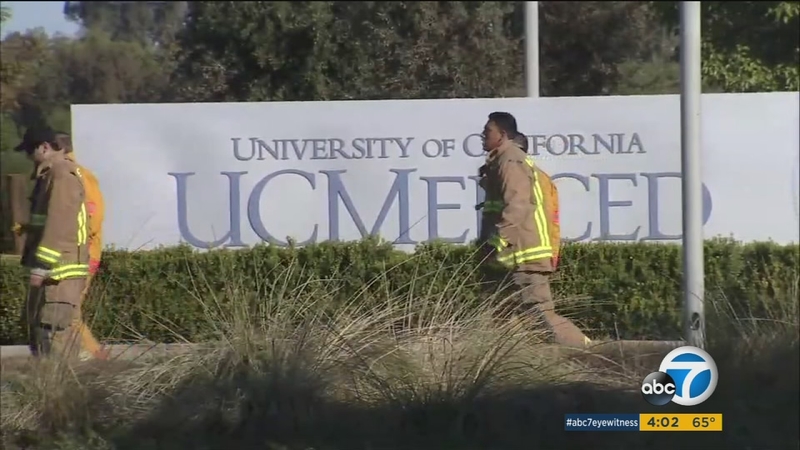 ABC7 sister station, KFSN-TV, learned the suspect was a male student at the university. It is unclear what motivated the stabbing.

Two of the victims were transported by a medical helicopter and the others were treated on campus. All four victims suffered non-life threatening injuries.

Officials originally stated there were five victims, but have since clarified that there were four.

The university sent out an alert at about 8 a.m. warning students to stay away from the Classroom and Office Building (COB) after a stabbing occurred inside.

Officials said the suspect, bearing a knife, attacked one student inside COB and the disturbance then moved outside were a second student was stabbed.

At one point, a staff member and a construction worker were also stabbed.

The assailant ran across campus to a bridge about 100 yards from where the original incident took place. Police shot and killed the suspect on the bridge.

The campus was shut down and classes were canceled for the rest of the day following the attacks, which lasted about five minutes.

Student Alex Lopez, 21, was heading to class when he realized something was wrong.

"I was listening to a podcast, and there was a break in talking, and I just hear a gunshot," he said.

He added that police and first responders flooded the scene.

The school has more than 6,600 students and is about 120 miles south of Sacramento in the farm-rich San Joaquin Valley. The campus opened a decade ago and is the newest college in the University of California system. It was also the first UC campus built since 1965.

The FBI is now involved and performing "various kinds of investigations."

In a statement released, UC Merced Chancellor Dorothy Leland said in part, "as shocking and troubling as today's act of violence was, I am thankful that the incident was quickly brought under control by campus police and that the injuries to the victims do not appear to be life-threatening."

Leland said counseling services will be offered in the days and weeks ahead for those who were traumatized by the event.