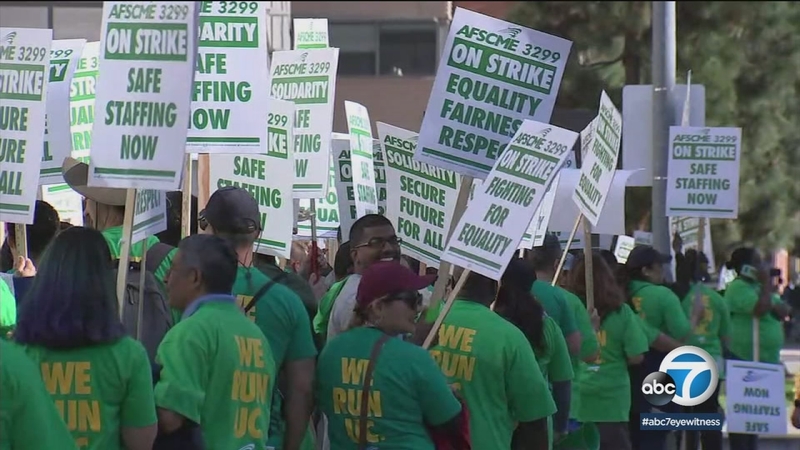 WESTWOOD, LOS ANGELES (KABC) -- Three UCLA staff members who were taking part in a state-wide strike conducted by University of California service workers on Monday are expected to be OK after being struck by a vehicle, authorities said.

According to UCLA police, a male driver hit three staff members taking part in the event near Westwood Plaza and Le Conte Avenue at about 9:45 a.m. The three victims were treated for minor injuries at the scene.

The driver of the vehicle was taken into custody and transported to UCLA Ronald Reagan Medical Center for evaluation prior to being transported to the UCLA Police Department.

Witnesses said the protesters were walking safely in the crosswalk when the crash happened. They said the driver, behind the wheel of a van, was trying to make his way through the large group when he struck the three victims, including one who was seen holding onto the hood of the vehicle.

"That guy ran him over like four blocks. Like, I can't even explain it. It's just ridiculous and sad," said Nayley Castillo, who was participating in the strike.

Picketers gathered early Monday morning at UCLA Medical Center in Westwood, one of many strikes taking place at campuses and medical facilities across California. The strike is forcing hundreds of surgeries and appointments to be rescheduled.

The American Federation of State, County and Municipal Employees (AFSCME), which represents over 25,000 service and patient-care technical workers at the University of California, will be on strike for three days following more than a year of stalled contract negotiations.

According to AFSCME, the strike will involve 9,000 service workers, but they will be joined by more than 15,000 patient-care technical workers.

University of California service workers picketed outside the UCI Medical Center Monday as part of a state-wide strike over wage, race and gender inequalities.

In Orange, hundreds of people picketed outside of the UCI Medical Center. One of those service workers, Monica de Leon, said it's hard to make a living on the wages provided.

"Some of us cannot even afford to live in the cities that we serve. We're in major cities and the university doesn't want to address that type of inequality," she said.

The UC system said its workers are compensated at or above the market rate and in some cases, as much as 17 percent higher than comparable jobs. UC officials said the union is demanding a 6 percent annual wage increase and refused the UC's offer of a 3 percent annual increase for four years, plus health and retirement benefits.

The union denounced the move to impose contract terms, responding by issuing a notice of a strike set to last until Wednesday.

"We've bargained in good faith for over a year to address the widening income, racial and gender disparities that front-line, low-wage workers at UC are living every day," AFSCME Local 3299 President Kathryn Lybarger said. "Instead of joining us in the effort to arrest these trends, UC has insisted on deepening them - leaving workers no option but to strike."

UC officials issued a statement saying they "strongly disagree with AFSCME's decision to strike, which will negatively impact patients, students and the UC community."

UC officials said it has retained temporary health care professionals with extensive qualifications so it can maintain patient care during the three-day strike.