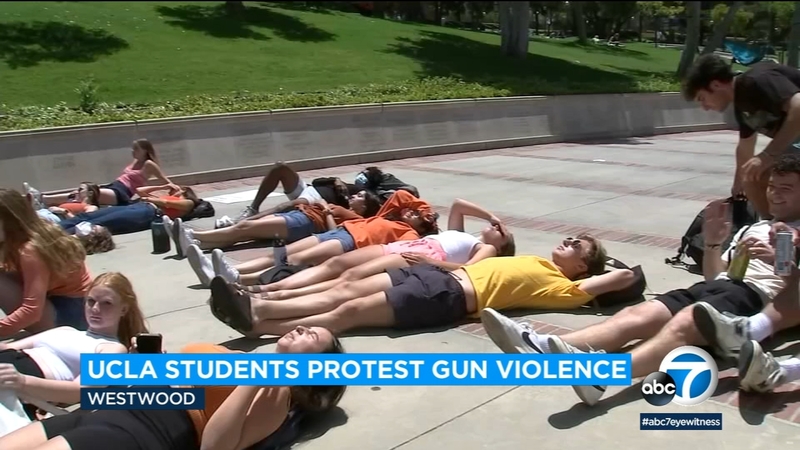 LOS ANGELES (KABC) -- Dozens of UCLA students called for swift action and a change in national gun laws after a recent string of mass shootings, as they remembered those who have been killed.

Around 70 UCLA students lied on the ground for five minutes and 37 seconds on Tuesday to symbolize one second for every student, they say, has been shot and killed in a school shooting since the Columbine High School massacre in 1999.

Danae Smith, a student who participated in Tuesday's demonstration, said she grew up in Los Angeles with a fear of guns.

"I grew up with the anxiety almost all my life, ever since I was a child," she said. "I have random thoughts of getting shot at or seriously getting injured by a gun. Growing up, my grandmother taught me to be very observant and careful."

The organizers of Tuesday's protest wanted their silence to send a strong message to anyone who would watch and later listen.

Their message is simple -- after the school shooting in Uvalde, Texas that left 21 people dead, there needs to me some kind of gun reform.

"Ultimately, it is our responsibility to, you know, push for the changes that we want to see and that we know are right," he said.

Emma Barrall, one of the organizers of Tuesday's protest, is from Texas and hopes this is the beginning of something that'll convince fellow students to not only support their cause, but to take action.

"Almost every single person we talked to in advertising for this protest was supporting gun reform, and I think probably a good percentage of them hadn't done anything in that department," she said. "So it's about both finding people that support you to stand with you, and then creating a big enough group to that the people that don't support you might consider change."

Some students told Eyewitness News that they know there will be some pushback, but they have to start somewhere if they expect changes to happen.