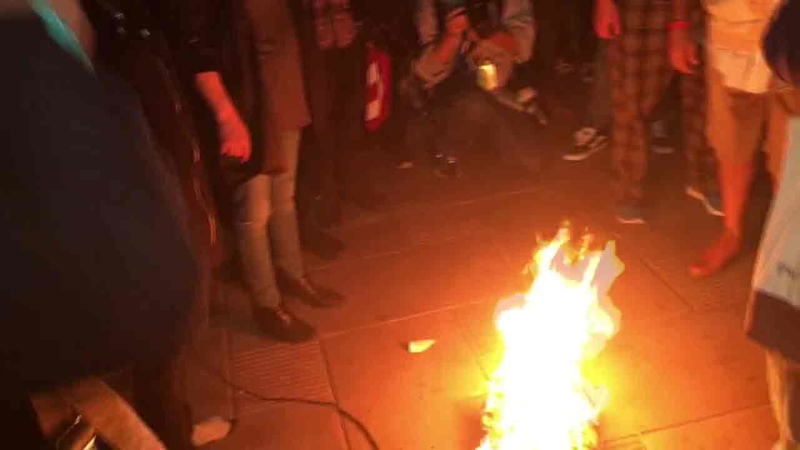 WESTWOOD, LOS ANGELES (KABC) -- Protests erupted overnight in the streets of Southern and Northern California after Donald Trump was projected to be the next president of the United States.

Hundreds of students at UCLA left their dormitories and apartments, taking to the hallways and streets chanting "(expletive) Donald Trump," among other things.


Many posted photos and videos to Snapchat, Instagram and Twitter. As many as 1,500 to 3,000 people were estimated to be marching through the campus, according to authorities.

The Los Angeles Police Department said there were about 20 students exercising their First Amendment rights.

By 4 a.m., UCLA police said "all demonstrators (had) gone back to their dorms." No kind of damage or violence was reported near campus.

Students are now chanting "not my president" pic.twitter.com/d2EJNytJw7

Demonstrations also formed at UC Irvine, authorities said, and it started at a university shopping center then moved across campus.

About 300 students participated in a peaceful 90-minute march, according to UCI spokesperson Cathy Lawhon. Some were seen waving Mexican flags, concerned about Trump's plans for immigration reform.

In downtown Los Angeles, anti-Trump protesters were more rowdy. People set a Trump pinata on fire before a man from the crowd lit an American flag and dropped it to the ground. Overall, official said the demonstrations were peaceful.

Police in Oakland made some arrests for disobedience and vandalism in a downtown protest. At least 50 protesters marched from downtown to state Highway 24, where a protester was hit by a car near the Claremont Avenue off-ramp. The victim was being treated for serious injuries, according to the California Highway Patrol.

Officers were at the scene in riot gear, including helmets, gas masks and long batons as several fires were set.


Local firefighters extinguished the flames and were patrolling the area in anticipation of additional protest-related fires.