Single-step carbon sequestration and storage, or sCS2, focuses on removing carbon from the ocean instead of the air
KABC
By Phillip Palmer 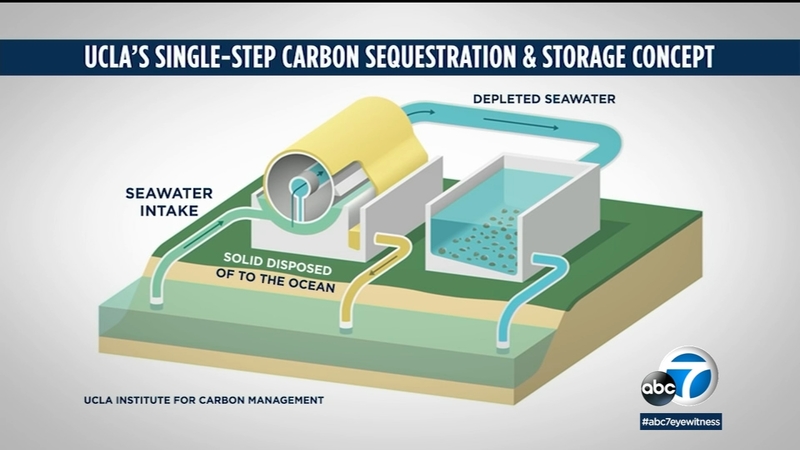 LOS ANGELES (KABC) -- No matter how effective we become in reducing carbon emissions, there remains the need to remove carbon from the atmosphere in order to reverse the effects of climate change.

"When you think about the scale of what we're talking about, it's essentially the largest industry that's never been created," Gaurav Sant, Director of the UCLA Institute for Carbon Management said.

A common method of removing carbon from the air is to pump it deep underground where it won't contribute to the climate crisis. Other methods often compress it to store it in canisters, and those efforts have their critics. A team of researchers at the UCLA Samueli School of Engineering have developed something called Single-step carbon sequestration and storage, or sCS2, that focuses on removing carbon from the ocean instead of the air.

"We're simply taking the CO2 out of that seawater, and then returning the seawater back into the ocean so the process can start again," Dante Simonetti, UCLA Assistant Professor of Chemical and Bimolecular Engineering, said.

The Biden Administration is finalizing a waiver that would let California establish its own, stricter emissions standards.

The goal is to create a business model that can scale globally.

"We do this in a way where we ensure carbon removal that's both permanent and durable, for on the order of thousands to millions of years," Sant said. "And you do this at a scale that's globally relevant. That's really what the sea change process is about."

America's coastline will see sea levels rise in the next 30 years by as much as they did in the entire 20th century, with major Eastern cities regularly hit with costly floods even

In lab experiments, a prototype pulls in seawater through a mesh, allowing an electrical charge to pass into the water. That starts a series of chemical reactions that ultimately deplete the seawater of dissolved carbon dioxide and then, when it is pumped back into the ocean, it can then absorb more carbon. It's a process similar to how seashells form.

"The seawater acts as a sponge for CO2, and our technology rings out the sponge and traps the CO2, and then puts it back out to absorb more CO2," Simonetti said.

Carbon dioxide levels are 150 times more concentrated in seawater than in the air, meaning extracting carbon from the ocean is more efficient than other carbon removal methods. Additionally, the sCS2 method produces hydrogen as a byproduct, which in theory could be used to help power, among other things, a desalination plant.

"It removes the CO2 from the water and then it provides a stream to the desalination plant that's actually easier to process and then it generates hydrogen that if the plant wanted to use that hydrogen for energy, it can harvest that hydrogen," Simonetti said.

Monday's study says the megadrought is now the worst-case scenario officials and scientists worried about in the 1900s.

Sant says that added revenue stream could be critical to the large-scale success of cSC2.

"You have an opportunity to, in effect, reduce the overall cost of the process, because you create a valuable co-product while effecting carbon removal," Sant said.

If all goes well, an operating facility using this technology could be running within the next five to seven years.

You can read more about the UCLA research project and access the full report here.