Around 100,000 Ukrainian children live in orphanages and institutions.
KABC
By Denise Dador 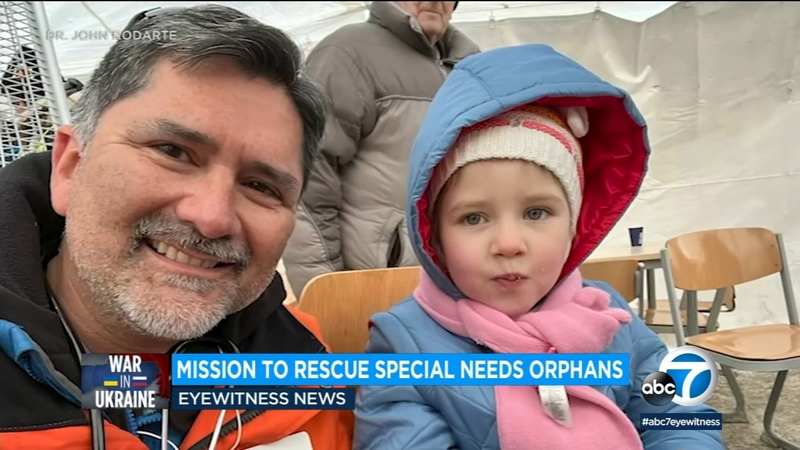 LOS ANGELES (KABC) -- Thousands of Ukrainian children in orphanages and institutions are at risk of being left behind.

One local pediatrician with a team of volunteers went to Ukraine to rescue a group of adopted orphans with special needs. Their new parents in the U.S. want to bring them home.

The week-long mission was fraught with danger, disappointment and sadness, but there were moments of joy.

A Southern California man is part of a mission to rescue several disabled orphans in Ukraine who have been adopted by U.S. families.

At the Ukraine-Romania border in frigid temperatures, Sophia warmed everyone's hearts. It was a brief respite for Rodarte, who is also a member of the Los Angeles County Sheriff's Department's Search and Rescue team.

He went to Ukraine as part of a mission to find and bring back 23 orphans adopted by U.S. families with special needs.

The fighting forced the orphans, some with severe medical conditions, to scatter.

"Some went missing, some were in hiding, you know? Trying to hide from bombing and stuff. So it was like playing a chess game, like, 'Where did they go?'" Rodarte said.

Rodarte is part of a team of specialized volunteers from the group's 3rd World Volunteers and Exodus. All of them donned bullet proof armor when entering Ukraine.

"We had our flak jackets on. We had a sign made up that said 'a doctor' in Ukrainian," he said.

While searching for the orphans, the team aided many other refugees. One father nearly ran out of medication for his daughter who had a seizure disorder. Volunteers were able to provide him some.

"We delivered it to him there at the tent. The refugees tend to be so thankful, just to know that he could take care of his daughter and keep her seizure free until their next stop," said Rodarte.

At night, they slept in safe houses.

Around 100,000 Ukrainian children live in orphanages and institutions. Without protection, those at-risk youth could fall prey to exploitation.

Shortly after Rodarte returned to L.A. on Saturday, he received word that some of the orphans had been located and that one child is about to be moved.

As he watches a video of Sophia smiling, the joy on her face will be his happiest memory.

When she's older, she'll come to understand why war came to her homeland, but it may never make sense.