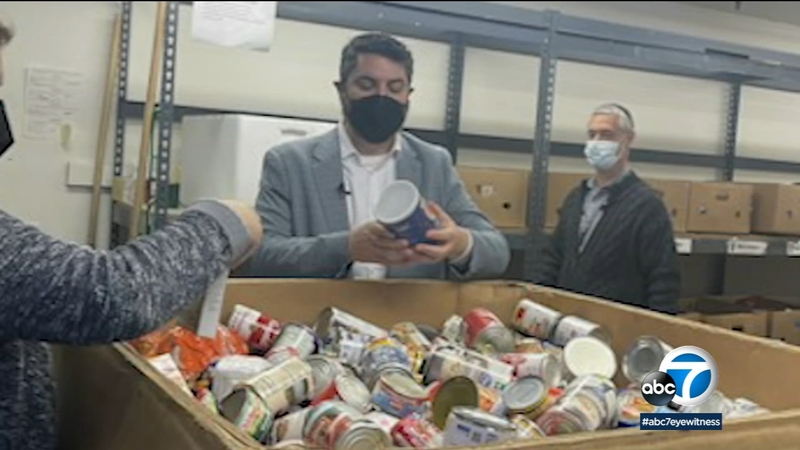 LOS ANGELES (KABC) -- Even in Los Angeles, it's not difficult to identify with the pain of the Ukrainian people. For Jews, the Russian invasion is all too familiar and at the Jewish Federation of Greater Los Angeles, fundraising efforts to help refugees have already brought in over $1.5 million.

"We look at this story, the story of people being victimized, of people being pushed around, of being brutalized and we see our ancestors in that story," said Rabbi Noah Farkas, the president and CEO of the nonprofit organization.

About 200,000 Jews live in Ukraine. Before the holocaust, Odessa was the third largest Jewish community in the world. On Sunday, Farkas will travel to the Ukrainian border in Poland and help refugees on their journey.

"Imagine being on that bus, not knowing if you can make it to the border, and then you finally make it to the border and you cross that border, you feel very alone -- that your experience, the entire uprooting of your life, the school you went to, the parks you used to go to, the grocery store you went to -- that's all behind you and you don't know what your life is going to be like," said Farkas.

"We need to keep amplifying those messages on a very personal way so that folks here back in L.A. understand the human cost of this authoritarian invasion."

The funds the federation has raised will provide lodging, clothing, food and medical assistance for any refugee seeking safety. The Jewish Federation is also helping Jews fleeing Ukraine make the move to Israel. Some planes from the region have already landed in Tel Aviv.

Andrew Berezin of Los Angeles is from Mariupol and his parents are currently in western Ukraine, waiting to make the permanent move to Israel where his sister already lives. Berezin says the actions of the world helping Ukrainian's has restored his faith in humanity.

"If something like this happened to other people, what would you expect from other people? Would you expect to be on your own? Or to expect the world to help you? just a little bit of empathy and compassion will take you a long way," said Berezin.

If you'd like to donate to the Jewish Federation of Great Los Angeles Ukraine Relief Fund, you can click here.