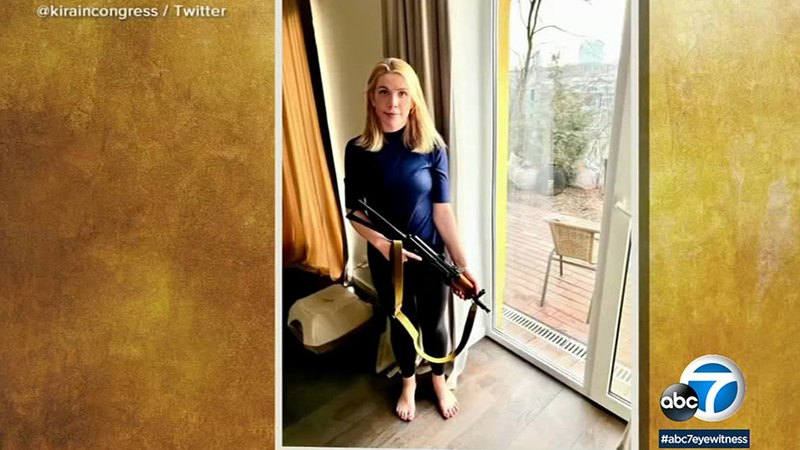 As the world watches the urgent situation in Ukraine unfold, women from all occupations and backgrounds are dropping everything to defend their country under siege.

"When Russia declared war on us, on Ukraine, this is when I decided to arm myself... and for the last five days I've spent trying to learn to use it," said Ukrainian parliament member Kira Rudyk.

She went viral for her social media posts showing her bearing arms and preparing for the raids in Kyiv.

Rudyk says the country has handed out 20,000 weapons, and hers is one of them.

Under martial law, men are required to stay back and fight the Russian invasion, but many Ukrainian women are not taking the chance to leave.

"I was helping my husband to pack for a war... and then I thought 'OK, he's going to war. I'm going too.' So we are here together," said one woman.

Anastasia Lenna, a former Miss Grand Ukraine, posted a photo of herself holding a rifle in hand, with patriotic hashtags. She later explained the weapon in the photo was an airsoft rifle and she was posting the images to inspire others and show that the women of Ukraine are "strong, confident and powerful."

Alina Miskur has remained in the outskirts of the country's capital city, Kyiv, kneading provisions for citizens and soldiers alike.

"We decided to bake bread for our soldiers so we make it for free... in case we are needed, we should help," she said.

The women of Ukraine are hoping that, like them, the world will take notice and take action.

"We will now have a generation of children who know what war is, who will know to go down to the bomb shelter...after the siren alarm. This is what makes me very angry and this is what empowers me," Rudyk said.

Despite years of tension with Russia, she said she never imagined war would land on her doorstep, but when it did, there was no question that she would serve.