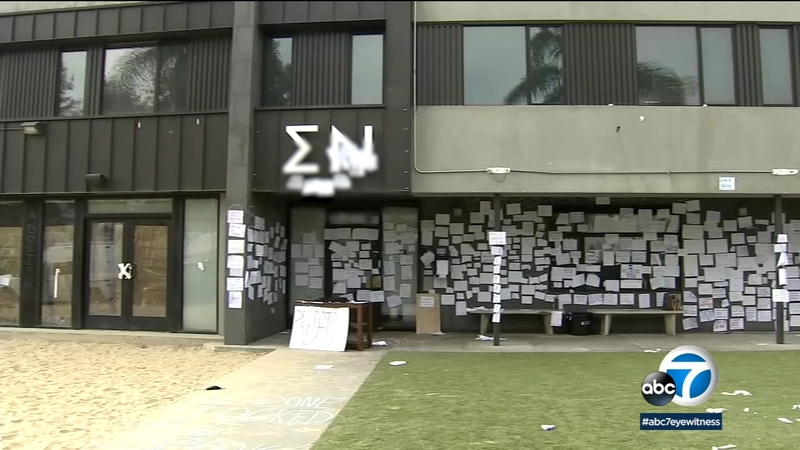 USC said the Los Angeles Police Department has been notified. LAPD told Eyewitness News it has opened an investigation into an incident involving four alleged victims who were possibly served spiked drinks at a fraternity party held Sept. 25.

According to a USC Department of Public Safety log, from Sept. 27 to Oct. 20, six different incidents of drugging were reported at the Sigma Nu house. One of those drugging incidents also involved a sexual assault.

Another drugging incident was reported during the same timeframe, but the location was undisclosed.

USC stated it takes the allegations seriously and will provide a "fair, thorough and timely resolution process."

"While we are unable to discuss the specifics of this matter due to student privacy laws, we are unequivocal in our commitment to fostering a safe environment for all of our students, faculty and staff," the university said.

Due to the suspension, the fraternity chapter is barred from hosting or organizing any activities. No parties and social gatherings will be allowed at the fraternity house located at 660 W. 28th Street, USC said.
Sigma Nu's national headquarters was contacted by the university about the suspension, according to Christopher Brenton, director of communications for Sigma Nu Fraternity Inc.

"The Fraternity is concerned by these serious allegations and will seek to work with University officials to investigate the matter," Brenton said. "The Fraternity will determine its further actions based upon the investigation. Sigma Nu Fraternity remains committed to responding appropriately to all matters of confirmed misconduct."

Several students Thursday evening gathered outside the Sigma Nu house in support of the victims.

Some students there said the issue has been ongoing for several weeks.

"I mean the fact that this happened over multiple weeks over and over, and the guys were confident enough that they could do this multiple weeks in a row to multiple women - that they would not get in trouble, and that it would just be fine, says everything about how safe men feel hurting women," said student Sophie Beitel.

By Friday morning, the frat house was covered in graffiti and protest signs condemning sexual assault and what they believe is a toxic part of Greek life culture.

"It's a message to people that this matters and I just hope that people come and they read the signs and see the frustration and anger," said USC sophomore Claire Smerdon. "I hope it means something."

"There definitely needs to be more of a conversation, more action needs to be taken," said student Shelbi Woodard. "I think this should definitely only be the beginning."