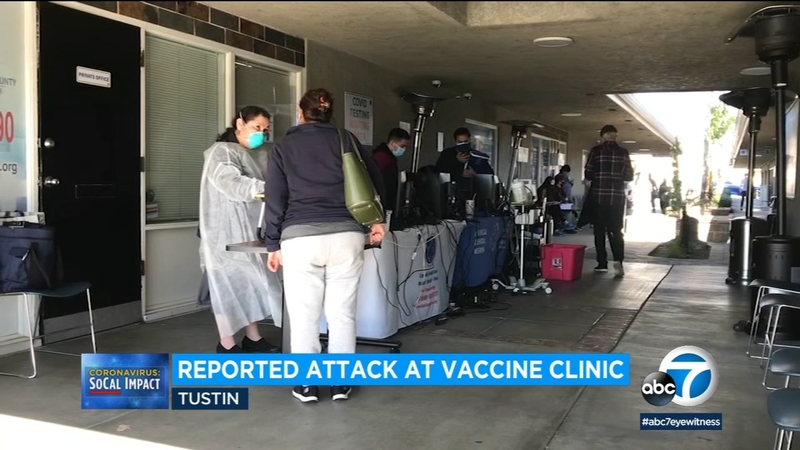 TUSTIN, Calif. (KABC) -- An alleged attack on staff members that occurred last month at a COVID-19 vaccination clinic in Tustin resulted in a man's arrest and is being reviewed Orange County prosecutors for possible charges, authorities said.

Seven police officers responded on Dec. 30 to the Families Together of Orange County community health center in the 600 block of West First Street, Lt. Matt Nunley of the Tustin Police Department confirmed to ABC7.

According to the Orange County Register, some staff at the clinic were reportedly assaulted by a man who refused to wear a mask and tried to enter a closed area before security personnel asked him to leave the premises.

"He said, 'I don't need a mask, I don't have the virus and you are the ones making people sick,'" the facility's mobile operations manager, Parsia Jahanbani, told the newspaper. "And just every type of profanity you can imagine."

The suspect, a 43-year-old resident of Poway in San Diego County, allegedly punched Jahanbani and another staff member before being restrained by five people. Police arrived and took the man into custody.

The case is being reviewed by the Orange County district attorney's office as the defendant awaits his first court appearance, which is scheduled to be held in a few weeks.