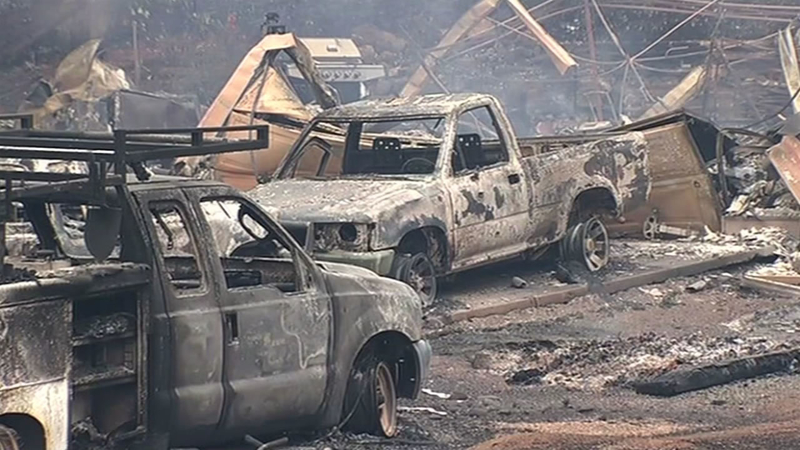 MIDDLETOWN, Calif. -- The Valley Fire has expanded to 612,000 acres, has 10 percent containment and has moved into three counties: Napa, Sonoma and Lake counties. Middletown and Hidden Valley Lake are among the hardest hit communities.

But it's not the only one. A second massive blaze, dubbed the Butte Fire, less than 200 miles away east of Sacramento, destroyed 135 homes as it spread through Amador and Calaveras counties in the Sierra Nevada. That fire has scorched 71,000 acres and is 35 percent contained.

Both fires have displaced 23,000 people, Mark Ghilarducci, director of the Governor's Office of Emergency Services, said at a news conference Monday. He says one person died in the wildfire, a 72-year-old woman with multiple sclerosis, about 20 miles north of the famed Napa Valley, and others are unaccounted for.

In addition to the 400 homes that have been destroyed in the Valley Fire, many more are threatened. Mandatory evacuation orders are in effect. More than 17,000 people have already been forced from their homes.

Ghilarducci said this summer's fires are the most volatile he has seen in 30 years of emergency response work. The main cause behind the fast-spreading fires is dry conditions from the drought.

Gov. Jerry Brown has declared a state of emergency for Lake and Napa counties on Sunday to free up resources. Several evacuation centers are now open, and many schools are closed for the day.

A Cal Fire spokesperson called the blaze unpredictable, saying it grew to more than 40,000 acres in just 12 hours.

Evacuated residents are wondering when they can return home. Authorities say it's still too soon to say.

At a meeting Sunday night, some evacuees expressed frustration at the number of homes lost. Cal Fire officials said early on, protecting property was not the top priority - protecting people's lives was.

The wind is spreading the fire toward Napa County and into the Geysers area. Cal Fire says there is damage to some of the cooling towers and power plants there. No homes in Sonoma County are threatened right now.

Crews are setting back fires along Highway 29 to starve the approaching fire of any fuel.

At a news conference Sunday, the CHP said it will be two to three days before people can get back into the burned areas.

Officials say at least 27 people have been treated at hospitals in Lake and Sonoma counties. Most of those injuries were for smoke inhalation and classified as minor. Four firefighters were burned, but all are expected to recover. The cause of the fire is still under investigation.

Napa and Lake county officials are warning evacuees to not post their address online. Burglars are on the prowl scamming fire survivors online and asking for addresses to go check on their homes in an effort to steal their belongings.

Many evacuees are worried about their pets and animals that were left behind. A Facebook page has been created to help reunite those residents with their animals.

The devastation in Middletown is simply unbelievable and now the neighborhoods are unrecognizable. Dozens of homes were destroyed by the monster fire that tore through the area Saturday night, burning neighborhoods on both sides of Highway 29. Cars were melted down to scrap and chimneys were the only structures left standing. Officials say there is no water or power in Middletown at this time and it's unclear when it will be restored.

Crews were able to save many homes in the area, but they say it wasn't easy. The wall of flames was so ferocious there simply wasn't time.