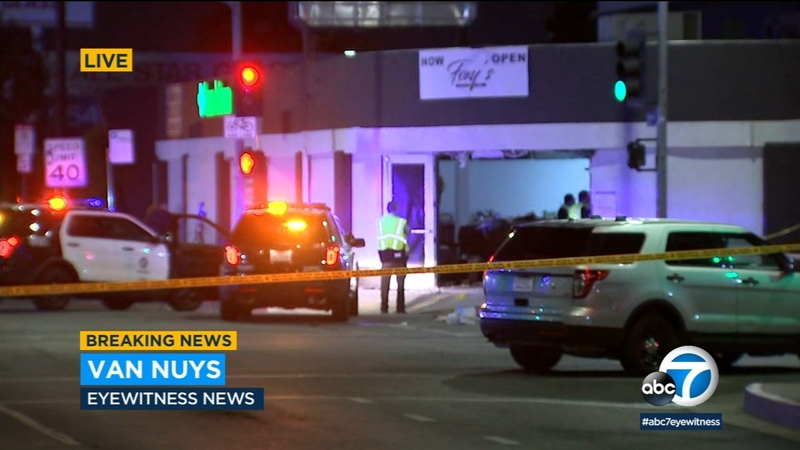 VAN NUYS, LOS ANGELES (KABC) -- A woman was killed and seven people were injured when a speeding SUV crashed into a pop-up Halloween store near the Van Nuys Airport Sunday night, officials say.

The crash happened just after 8 p.m., according to the Los Angeles Fire Department.

The SUV lost control, skidded some 200 feet and smashed into a commercial building with customers inside in the area of 7600 North Woodley Ave., according to the LAFD.

It crashed through the inside of the store for another 75 feet before finally coming to rest at the back of the building, investigators say.

One woman inside the store was declared dead at the scene. Seven other people suffered non-life-threatening injuries.

Los Angeles police say the driver was fleeing the scene of a street takeover event a few miles away that officers had just broken up. LAPD officers were following the suspect from a helicopter but did not describe it as an official police pursuit.

The driver was fleeing at a very high rate of speed and tried to swerve around a bus when he lost control and smashed into the building, police say.

"He was a young person driving insanely fast on residential streets and he could've killed many more people," one LAPD officer said.

The woman who was killed was believed to be around 25-30 years old.

The suspect gave himself up at the scene. LAPD investigators say he had previously been arrested for a reckless driving collision a year or two ago.

The LAFD Urban Search and Rescue Unit is assessing the stability of the building.

CORRECTION: An earlier version of this story said the location was a restaurant. In fact, it was a pop-up Halloween store.