Over 100 arrested after looting, vandalism erupt near large protest in Van Nuys

More than 100 people were arrested Monday after police declared an unlawful assembly and began dispersing the crowd at a protest in Van Nuys.
KABC
By Jessica De Nova 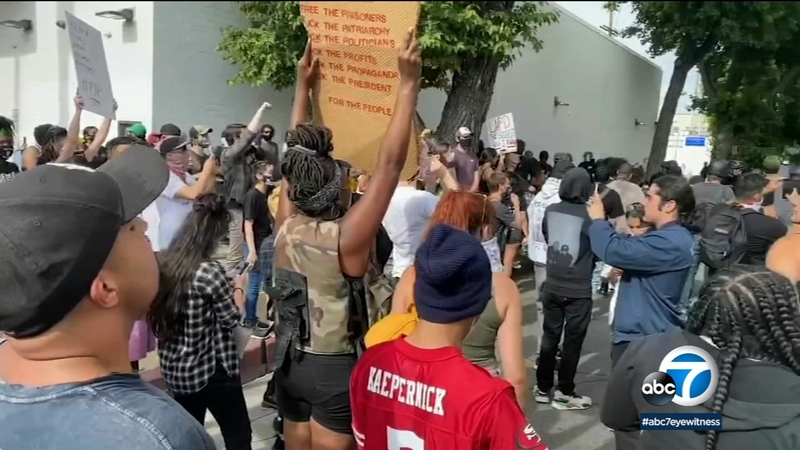 VAN NUYS, LOS ANGELES (KABC) -- More than 100 people were arrested Monday after police declared an unlawful assembly and began dispersing the crowd at a protest in Van Nuys.

The crowd of several hundred had been protesting mostly peacefully for hours at an intersection in Van Nuys. Most people were standing on the sidewalks, but some spilled over into the street and were walking between cars.

At one point, dozens in the crowd started running, apparently startled by a loud noise or disturbance. But there were no apparent injuries.

Police appeared to be taking no chances, given the unrest around Southern California in recent days linked to protests. By around 3 p.m., the Los Angeles Police Department had declared an unlawful assembly, the first step toward dispersing the crowd.

As police began breaking up the crowd, there were scattered reports of looting nearby on Van Nuys Boulevard. A Boost Mobile store was ransacked and at least three pharmacies were burglarized.

One pharmacy near Vanownen Street and Haskell Avenue went up in flames after being looted. Nearby businesses sustained water and smoke damage.

"Everything is lost. What is not burned is all smelly and wet," said Metro PCS employee Guillermo Alcantara.

There was a brief chase of suspected looters. They drove around on surface streets for some time, but police pulled back out of concern for the danger to the public. Looters were seen hitting medical marijuana shops, a mobile phone store and other retail locations.

Police were seen running after several individuals on foot.
In an exclusive surveillance video obtained by Eyewitness News, a large group of looters was caught on camera stealing merchandise from YM Pharmacy.

Pharmacy technician Ana Lobo said some of their customers are elderly who rely on delivery services for the prescriptions that were stolen.

"The people expecting us, and right now, I don't know what I'm gonna say," she added.

Those pills, some of which are controlled substances, are now on the streets.

The protest, like many around the country, was a reaction to the death of George Floyd in Minnesota.

The crowds later thinned out, but smaller groups were seen lingering on other nearby street corners. There were other protests being held in downtown Los Angeles, Hollywood and other locations on Monday.

Business owners and community members came together on Tuesday to clean up after looters left a path of destruction.