Military confirms body found was that of Vanessa Guillen 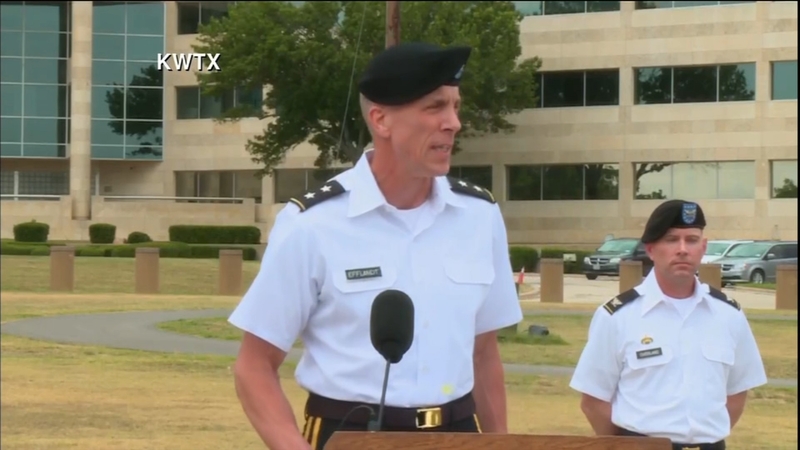 KILLEEN, Texas -- Dressed in a gray and white striped shirt and mask, a suspect in the disappearance of Fort Hood Army Specialist Vanessa Guillen faced a judge Monday morning.

Cecily Aguilar, 22, is charged with felony alteration and mutilation to impede an investigation after authorities say she helped hide the body of Guillen.

Aguilar appeared in front of the judge in Waco, where an affidavit read in court went into great detail of the first weeks of Aguilar and Aaron David Robinson trying to cover up what happened.

When asked if she understood the charges against her Aguilar reportedly said, "Yeah, yeah, sure."

Aguilar's next court appearance will be for a preliminary hearing at 9 a.m. on July 14.

Cecily Aguilar, 22, charged with one count of conspiracy to tamper with evidence.

The Army said Aguilar is the estranged wife of a former soldier who was stationed at Fort Hood.

Robinson, a 20-year-old Army Specialist, was identified as the person of interest in Guillen's case. She disappeared in April. Robinson died by suicide when authorities made contact with him, according to special agent Damon Phelps with the Army's Criminal Investigation Command.

Aguilar reportedly helped lead law enforcement to Robinson, before he was confronted and killed himself.

On June 30, investigators had Aguilar call Robinson as they listened in and recorded the call. They say Robinson didn't deny any of the alleged crimes, and said to her, "Baby, they found pieces," referring to the discovery of remains.

Aaron David Robinson, 20, died by suicide when authorities made contact with him, according to the Army.

Robinson allegedly admitted to Aguilar that he transferred a woman's body off the base to a remote site in Bell County.

According to the criminal complaint, on June 21, what appeared to be the burned remains of a plastic tote or tough box were found in an area near where Robinson's phone pinged. No remains were found that day.

According to investigators, Aguilar admitted that Robinson told her he killed a female soldier by striking her in the head with a hammer multiple times at his arms room while on post on April 22, the same day Guillen went missing.

The criminal complaint said Robinson then placed Guillen's body in a box and moved the box to a location near the Leon River.

Aguilar told officials that sometime between the evening of April 22 and the early morning of April 23, Robinson picked her up at the gas station where she worked and took her to an area near the Leon River and a bridge. A box with wheels and handles was already at the site.

Aguilar said Robinson walked her over to the woods, opened the box, and she saw a dead woman inside. Aguilar later told investigators she "recognized the deceased whom she helped Robinson mutilate and dispose of" as Guillen.

The complaint said Aguilar and Robinson then used a hatchet or ax and a machete-type knife to dismember the body. They allegedly tried to burn the body, and placed the remains in three separate holes and covered them up.

Aguilar and Robinson reportedly burned their clothes after disposing of Guillen's body, and returned to the site four days later to uncover the remains and break them down more, according to additional court documents.

While the Army has identified the remains found in the shallow grave to be those of Guillen, Army Criminal Investigation Division has yet to independently confirm the identification.