Vanessa Guillen: Protesters in DTLA call for congressional investigation into murder of soldier 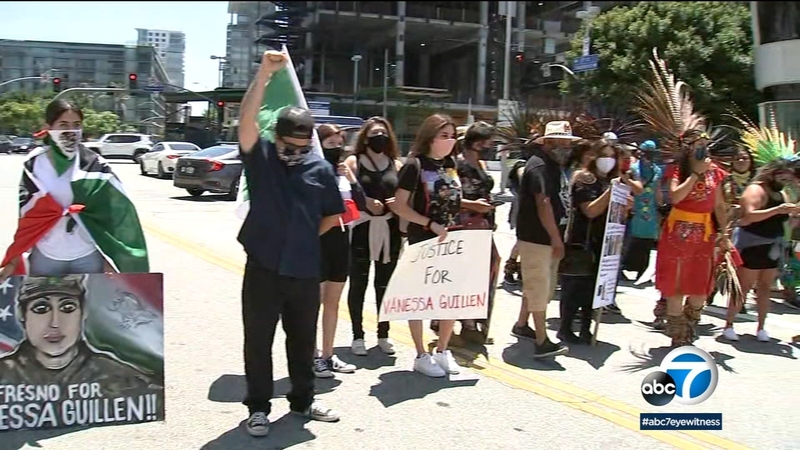 DOWNTOWN LOS ANGELES (KABC) -- A group of protesters gathered in downtown Los Angeles Sunday to demand justice for Vanessa Guillen, calling for a full congressional investigation into the murder of the Fort Hood soldier.

Marchers and a caravan of cars kicked off the demonstration with an opening ceremony at Olympic Boulevard and Figueroa Street.

The 20-year-old soldier stationed at Fort Hood in Texas went missing back in April and her remains were identified the Army earlier this month, according to her family's lawyers.

Guillen's family has said that she told them she was being sexually harassed, but never reported it. The Army has said it found no evidence that supports those claims.

Now, her family is pushing for Congress to pass legislation to allow victims of sexual harassment in the military to report abuse to a third party agency.

Family plans to introduce the #IAmVanessaGuillen bill for victims of sexual harassment to report abuse outside the chain of command.

Aaron Davin Robinson, 20, was a fellow soldier who was believed to have killed Guillen, but he pulled a gun and shot himself earlier this month as police were trying to make contact with him.

A civilian suspected of helping Robinson dispose of Guillen's body has since been arrested. Cecily Aguilar, 22, has been charged with one count of conspiracy to tamper with evidence.
Report a correction or typo
Related topics:
downtown lalos angelesvanessa guillenfort hoodu.s. & worldarmymissing personsoldier killed
Copyright © 2021 KABC-TV. All Rights Reserved.
More Videos
From CNN Newsource affiliates
TOP STORIES