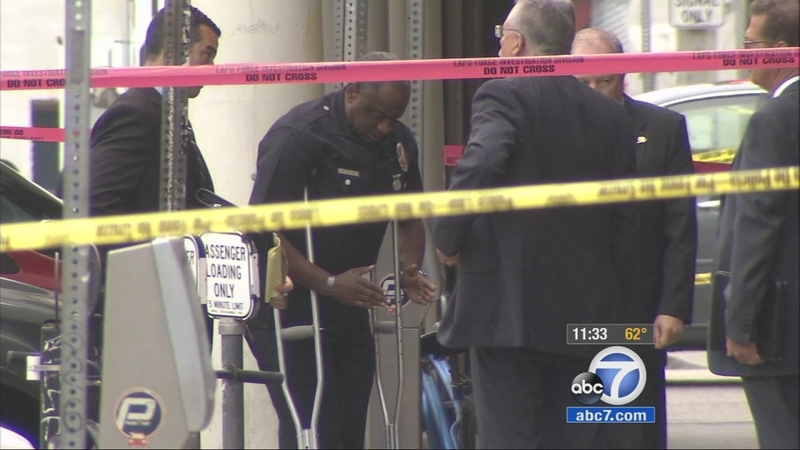 The shooting occurred near Pacific and Winward avenues near the beach late Tuesday night. An unarmed transient man, identified as 29-year-old Brendon Glenn, was shot and killed by an LAPD officer who was responding to a call about someone "disturbing the peace."

A makeshift memorial of flowers and candles now marks the scene of the shooting.

"To shoot a young, black kid who is so troubled and who just wants his mom - so I brought my Mother's Day flowers," said Jodie Evans, a Venice resident.

Glenn was shot after getting into some sort of struggle with the officer and his partner.

While many are mourning Glenn's death, others paint a different picture of the 29-year-old.

"Unpredictable, he gets aggressive," described Peter John Ruiz of Venice. "Not laid back like the rest of us. It was almost like he was trying to become an OG player or something, make a name for himself or something."

"The cop said, 'Put up your hands' or something like that. 'Show me your I.D.' And he went into his back pocket to pull out his I.D. and they shot him," said Paris Edwards of Venice. "They thought he had a knife or a gun. He had nothing. He had no gun, no knife, and he was dead in the street."

After viewing surveillance video of the shooting, Beck raised questions about the need for deadly force.

The chief's comments have angered the LAPPL, a union that represents police officers. The league said it's too early to suggest the shooting was improper. The union released the following statement:

"It is completely irresponsible for anyone, much less the Chief of Police, to render a judgement on an incident that is in early stages of investigation. As the final trier of fact in the use-of-force investigation and disciplinary process, the premature decision by the chief essentially renders the investigation process void. Additionally, by making his opinion public without having all of the facts, he influences the investigation for all parties involved, including his command officers and the public. As in the criminal justice system, everyone is innocent until proven guilty. We encourage everyone to reserve judgment until the investigation has run its course, and the facts are collected and assessed."

What led to the altercation remains unknown. The officer who shot Glenn suffered some type of injury following the incident and was seen on crutches. He was put on medication as a result of the injury, and officials say that's why he has not been interviewed by investigators yet.

Midday Thursday, demonstrators marched near the scene of the incident to protest the deadly shooting.

Demonstrators march near the scene of a fatal officer-involved shooting of an unarmed man in Venice on Thursday, May 7, 2015.