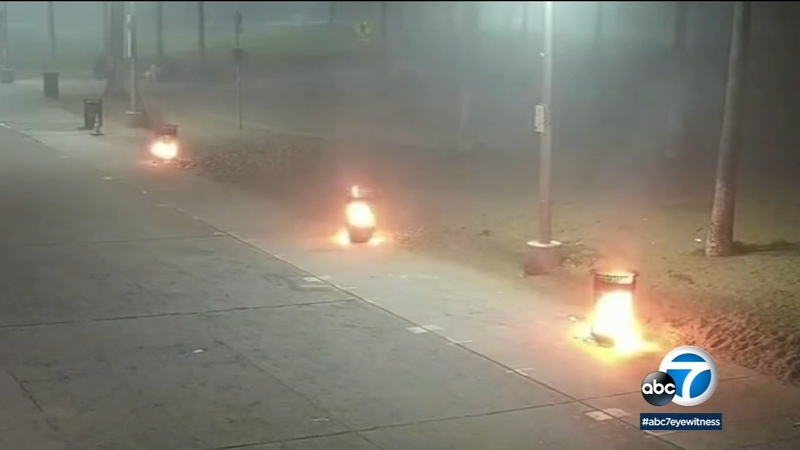 VENICE, Calif. (KABC) -- A group of Venice residents says it is putting the city of Los Angeles on notice, accusing government officials of not enforcing overnight camping prohibitions, and saying it makes the city liable for multimillion dollar lawsuit payouts.

The president of the 11-year-old Venice Stakeholders Association, Mark Ryavec, says residents of the beach community are frustrated that a significant homeless population is still living along the boardwalk and starting fires that threaten nearby buildings and homes.

"There's almost no police presence or fire department presence down here overnight," Ryavec said. "We're putting the city on notice, that, if there's loss of life, if there's a structure, they are clearly already negligent, and they already will face a huge settlement."

Last month, surveillance cameras captured a man starting fires in trashcans along the boardwalk. Investigators say he and another man lit 15 garbage bins on fire. One man was arrested, but the other is still on the loose.

The next day, two men started a cardboard box on fire, destroying a park bench.

Last week, an attorney for the stakeholders group sent a letter to several Los Angeles city offices, once again pointing out the dangers, and warning that continuing to ignore the overnight camping problem in Venice could lead to expensive legal payouts.

Ryavec points to a fire from January 2021, which started in a homeless tent and quickly spread to a two-story building. It took more than a hundred firefighters to put it out, but not before the building was destroyed. The owner is suing Los Angeles.

Venice falls inside L.A. City Councilman Mike Bonin's district. Eyewitness News reached out to his office for comment, but he was unavailable for an interview.

Ryavec admits that the homelessness problem in Venice has improved dramatically, especially during the day. At night, however, he says that at least 70 people are still camping on the beach. And even though LAPD and sanitation crews come in every Thursday to move the campers out, he says the city needs to do this at least three times a week for it to work.