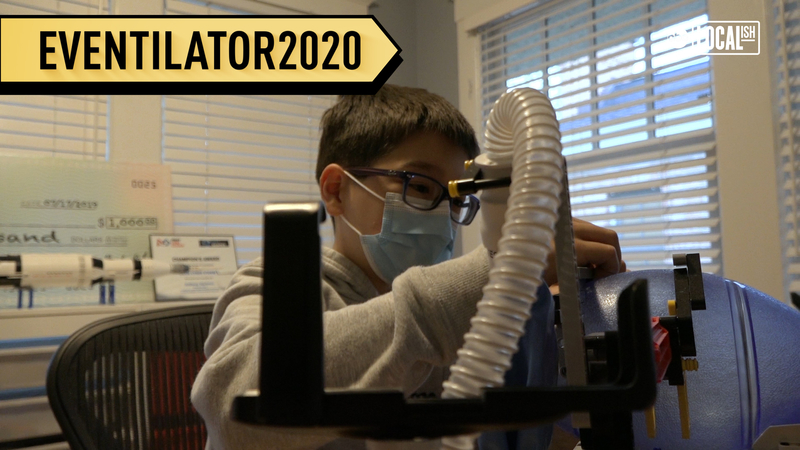 WINNETKA, Ill. -- A 7th grader from Winnetka, Illinois has created a ventilator out of Legos in an effort to help with ventilator shortages.

Anthony Hartman said he's been creating and building things ever since he can remember. The 12-year-old used up his free time during the peaks of the pandemic to think of solutions to help those in need. In this case, he wanted to provide a solution for ventilator shortages.

In March, Hartman created his ventilator made of Legos, naming it the EVentilator2020.

"I saw a bunch of universities making respirator units that were cheaper and more affordable. I wanted to make my own version with a twist, which was the Lego piece," said Hartman.

Hartman used materials from home to create his invention, which took him several weeks to complete. He said the skills he learned while being chief engineer for his middle school's LEGO League Robotics team helped him tremendously in bringing his vision to life. He incorporated the LEGO Mindstorm EV3 robotics bricks and motors.

Last summer, the 7th grader entered his creation into the Kids Think Tank contest, which he's been involved with since 2019. Although he did not take home a prize, he was still recognized for his idea.

"The Kids Idea Tank is a way the kids can take their idea to the next level and practice all these entrepreneurship skills, like pitching, brainstorming and collaborating with someone," said Lowey Sichol, founder of Kids Idea Tank.

The 12-year-old said he will be submitting his EVentilator2020 idea to LEGO in hopes of creating a partnership in order to get his ventilators in the hands of rural medical professionals.
Report a correction or typo
Related topics:
winnetkaventilatorssciencelocalishwls
LOCALISH
Moonshot Compost turns your food waste into nutrient-rich compost.
The new St. Pete Pier is the crown jewel of this Florida city
Meet the Dumpling Dudez!
Beyond June: Apparel company celebrates Pride all year
TOP STORIES
Blink-182's Travis Barker reportedly hospitalized in LA
Father, 10-year-old son found dead next to car in Chatsworth
Trump WH attorney disputes Hutchinson testimony about handwritten note
Shooting suspect barricaded inside South LA apartment complex
Workers fired for not joining company's daily Christian prayer: EEOC
R. Kelly due in court for sex abuse sentencing in NYC
Source of mysterious lights over San Diego identified
Show More
FTC sues Walmart over scammers' use of money transfer services
After 18-month-old dies in hot car, dad dies by apparent suicide: P...
Giuliani associate to be sentenced for violating campaign finance laws
Biden administration plans to send out thousands of monkeypox vaccines
Migrants in search of a better life continue to die on their journeys
More TOP STORIES News