3 dead after being swept out to sea in Ventura County, fire officials say

Witnesses tell investigators the three people were fishing when a wave swept them into the ocean.
KABC 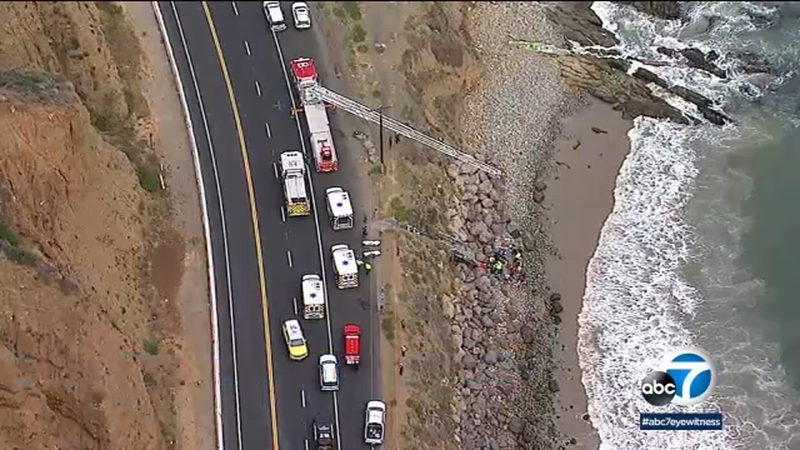 3 dead after being swept out to sea in Ventura County

VENTURA, Calif. (KABC) -- Three people are dead after they were washed off rocks and into the ocean in Ventura County Thursday evening, fire officials say.

#DeerInc; 3 people have been fatally injured after they were washed off the rocks into the ocean. All victims have been accounted for and the search operations have been completed. @VCFD pic.twitter.com/8YjkxGUmC5

Witnesses tell investigators the three people were fishing when a wave swept them into the ocean.

The 911 call came in just before 5 p.m. Thursday afternoon. Rescuers pulled them from the water near Point Mugu.

"We were able to get rescue swimmers in the water right away and start getting the people out," said Capt. Brian McGrath with Venture County Fire Department.

"It did take a little bit of time to find the third victim, however we did find him and pulled him out and started performing life-saving efforts upon that person as well," said McGrath.

The Ventura County Sheriff's Department says the three victims were a husband and wife and a grandmother. Other family and friends were on the beach at the time.

"We have chaplains on the scene consulting with family and friends making sure we take care of them too. Right now that's our top priority, aside from the investigation, is taking care of that family and helping them deal with that tragedy," said Deputy Chris Dyer with Ventura County Sheriff's Office.

The sheriff's department says the tragic accident serves as a reminder of the power of the ocean.

"The ocean is unpredictable. You always have to have good water safety, keep an eye on the ocean when you're doing stuff, but accidents do happen," said Dyer.

So far, the names of the three people have not been released.

Friends, family and neighbors are devastated after three people, including a child, were found dead in a pool in Middlesex County on Monday afternoon.