Drivers and protesters on the streets of Hollywood were involved in at least two separate violent confrontations, including one incident in which a protester was struck by a pickup truck.
KABC
By ABC7.com staff 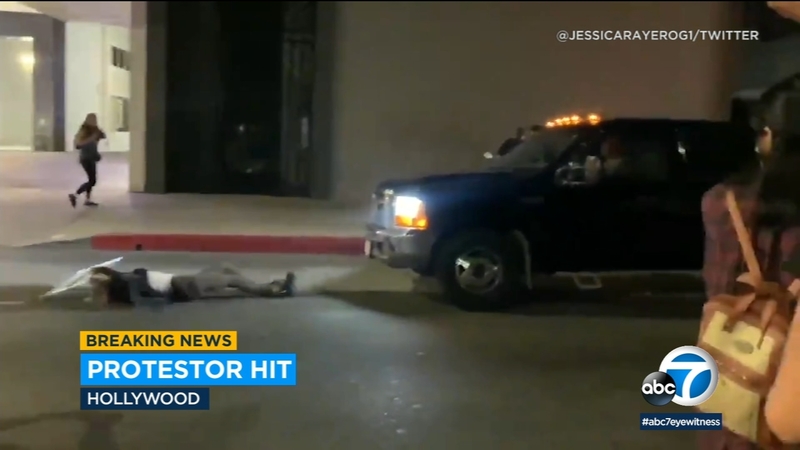 HOLLYWOOD, LOS ANGELES (KABC) -- Drivers and protesters on the streets of Hollywood were involved in at least two separate violent confrontations Thursday night.

In one incident, a car drove through a crowd of protesters and was chased down and attacked by people in another vehicle. The driver was able to escape but was detained by police.

The incident, at least the second Thursday night involving a vehicle and protesters in Los Angeles, happened in Hollywood around 9:30 p.m.
A crowd of several hundred people had gathered at Cahuenga and Hollywood boulevards to protest the Breonna Taylor case.

Most cars stopped for the crowd, but a white Prius tried to weave through the protesters to get by the intersection.

A protest in Hollywood took a violent turn when demonstrators appeared to have tried to pull a driver out of a vehicle.

Several of the protesters appeared to surround the car and pound on it as it drove by. Several also chased after the vehicle on foot. There did not appear to be any protesters who were injured by the vehicle.

A black pickup truck filled with several people chased after the Prius and stopped in front of it, as a green Mustang pulled up behind it.

People in the truck and the Mustang got out and started attacking the vehicle and apparently attempting to get the driver out. They were also smashing the exterior of the Prius.
The driver of the Prius managed to speed away from the scene and ran at least one red light in his attempt to get away.

Eventually police pulled over the vehicle on Santa Monica Boulevard and detained the driver.

A black pickup truck ran through a crowd of protesters in Hollywood and struck at least two people before fleeing the scene.

Video showed the driver of the vehicle hit one protester, stop momentarily and then take off.

LAPD said in a statement the driver of the blue pickup truck got into an argument with protesters and "attempted to get away from the situation" when he struck the protester standing in the street.

Police caught up to the truck driver and pulled over the vehicle a few blocks from the scene.

All drivers and victims involved in both of the incidents have been identified by police.