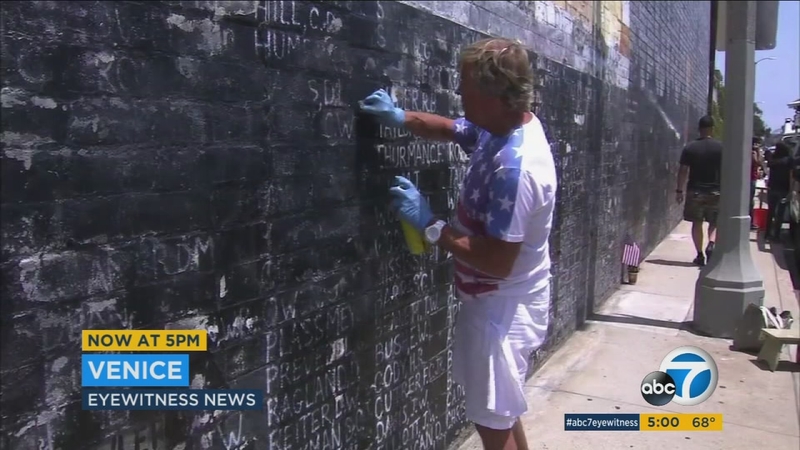 VENICE, LOS ANGELES (KABC) -- Volunteers helped cleanup a Vietnam War memorial wall in Venice after it was vandalized with graffiti on Sunday.

The memorial, located on a black wall along Pacific Avenue, was painted by a Vietnam veteran in 1992 and has 2,273 names on it. It declares "You are not forgotten," which was covered up by the graffiti. Citizens all the way from Lancaster and other areas came together to repaint the phrase over the markings and cleanup the graffiti.

"The bad guys were not going to win today. We are going to come here and repair the wall. These guys gave their lives so that we can have what we have today, and I refuse for them to be disrespected," said one volunteer.

The wall has been previously tagged, but the latest vandalism is the most extensive as it covers up the bottom half of the memorial for much of its length.

George Francisco, vice president of the Venice Chamber of Commerce, said the vandals who did the crime are "ignorant."

He added that the chamber was going to restore the wall, but plans were halted because of a possible decision to make the space as a development for the homeless or section 8 housing.

The taggers' disregard for the memorial not only brought volunteers to help clean, but many said it will now likely fast-track restoration plans.

The wall is owned by Los Angeles Metro and officials from the company said it will have their police department keep an eye on the area until Memorial Day.