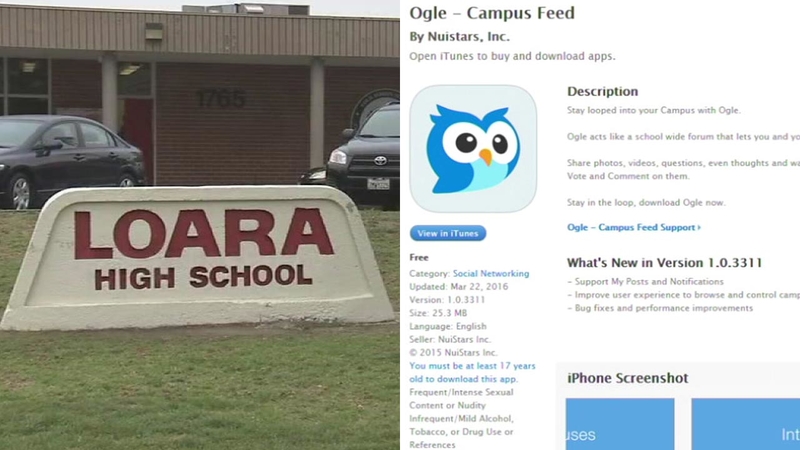 Violent threats made against OC school through app; 3 arrested

ANAHEIM, Calif. (KABC) -- Three people were arrested after violent threats were made against an Anaheim high school through an app that allows users to post anonymously, according to officials.

Meza was arrested Sunday afternoon during a traffic stop, along with his passenger, 23-year-old Johnny Aguilar. Police said both men had loaded handguns. Aguilar was also accused of violating his probation.

"It is concerning the fact that they did have firearms, but we don't have a crystal ball. We can't determine if they possessed those firearms to engage in some kind of school violence or if they had it for another reason," Sgt. Daron Wyatt with the Anaheim Police Department said.

Officials said Meza and Aguilar have known gang ties and detectives began investigating Meza after threats were made against the school on Ogle.

Students can use the app without a log-in, join chat groups and post photographs and videos anonymously.

A 15-year-old Loara High School student was arrested Saturday for making threats via the same app, according to police. The 10th-grader's identity was not released because of his or her age. No weapons were found at that student's home.

Wyatt said there is no connection between the 15-year-old student and Meza.

"It's important that we see that the system worked here. We were notified of a threat. We worked tirelessly to get the suspects in custody and prevent an incident from occurring," Wyatt said.

Wyatt said the threats did not single out a particular student or teacher. The threats were, however, directed specifically toward Loara High and indicated that something would happen on campus on Monday.

In emails to parents this weekend, Loara High School Principal John Briquelet said, "I am respectfully asking all of our Loara students and families to discard this application and to stop using it altogether until the company that created and maintains the program is willing to eliminate the hateful attacks and the highly inappropriate images and videos that have been posted thus far."

"If you are one of the small number of our students who have been posting this inappropriate and hateful material, I am asking that you please stop. Your actions are truly hurting others and could be worthy of criminal prosecution. Furthermore, these anonymous attacks on others constitute the lowest form of cowardice. You and I both know you are better than that," Briquelet continued.

Police said parents should be aware of their children's online activity and remind them that certain types of social media posts could lead to criminal prosecution.

"Whether this is a hoax or somebody really intends to do this, law enforcement takes it extremely seriously," Wyatt said. "The day and age that we're living in now with these school violence incidents, we can't take it for granted. We have to take immediate action as we've done in this case."

Police said the motive for the threats remain unclear.

Loara High School was open Monday with a higher level of police presence on campus as a precautionary measure, Briquelet stated.

There was also a heavy police presence on the campus of El Modena High School in the city of Orange on Monday following a threat also posted using Ogle. Orange Unified School District officials do not believe the threat is credible, so school was still in session with increased security.

ABC7 reached out to Ogle for comment and received the following statement: "We take the safety of our users seriously and do not condone any types of threats against others or against schools through Ogle app. As such, we are proactively monitoring content posted on our app in an effort to identify and remove such content and take action against those who violate our community rules."