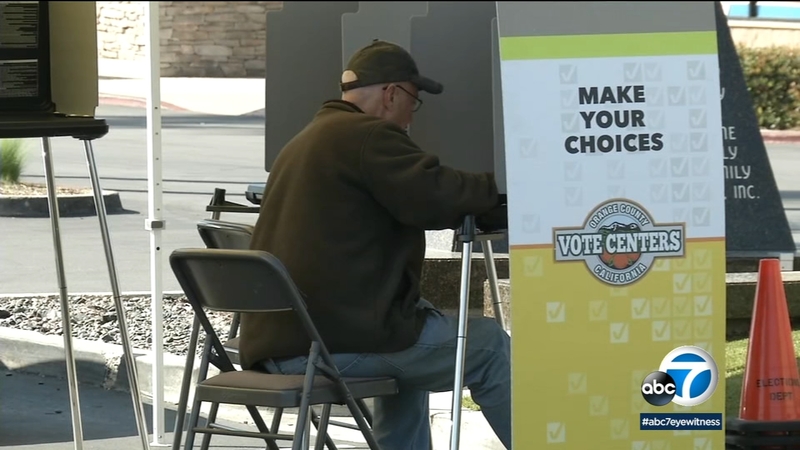 VILLA PARK, Calif. (KABC) -- More than a week before the California primary on March 3, voters are already heading to the polls as early voting centers open across the state.

It was Day 3 of 11 for this new method of voting in counties across California. Orange County opened its first pop-up voting center at a shopping center in Villa Park where a steady flow of voters arrived throughout the day.

"Oh, it's great!" said Orange resident Kenneth Nishizaki. "I had so much fun. People are so nice there. I've never had an experience like that before."

Said Orange resident Gerald Brinkman: "I think it's very nice. And it's convenient which makes it nice - gets the traffic through."

This year, the vote center model replaced traditional polling places, allowing people to vote at any such location in the county. The first vote centers opened Saturday and will remain open until Election Day. Others will be open for four days, starting the Saturday before Election Day.

"I'm going be out of town on Election Day, so this is perfect," said Orange resident Jimmy Camp. "It was super easy. It took me less than five minutes. I walked right up. You sign the thing, you punch what ballot preference you want."

It was a smooth opening in Orange County, with more than 2,400 voters using their vote centers over the weekend. Although there were a few field issues, the OC registrar of voters says he is pleased with how the new system is operating so far.

In Los Angeles County, there were just under 9,700 voters who showed up over the weekend, but some vote centers couldn't open due to missing equipment or other issues.

Secretary of State Alex Padilla said there are issues every election, but this year there's time to work out all the kinks.

"We have 11 days of voting right? So if there are issues on one day, folks haven't lost their right to vote," he said in an interview with ABC7. "And I think it's also the upside of this vote center model."