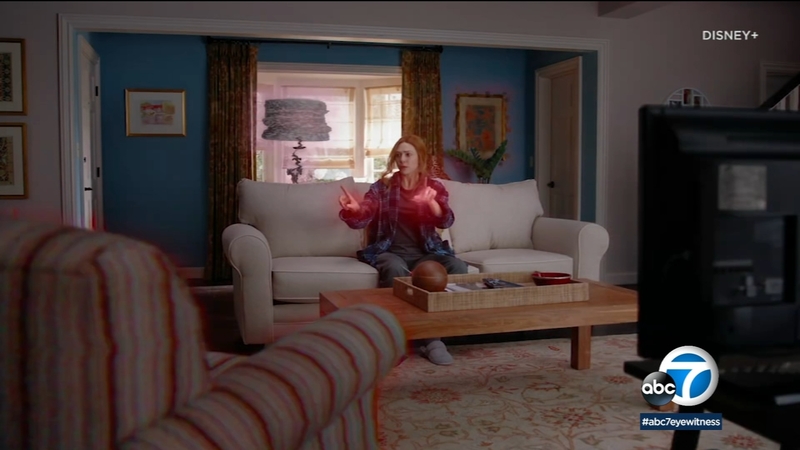 'WandaVision' comes into focus on Disney+

HOLLYWOOD, LOS ANGELES -- The Marvel Universe is entering the streaming world this week with the new Disney+ series, "WandaVision." With this series, you should expect the unexpected, including a stroll down TV's memory lane.

The show begins like a classic sitcom, but in the back of your mind, you're wondering what else is going on here since this is from the minds at Marvel.

"It's definitely going to take a little bit of time as you start to figure out what this puzzle really is, but that's the joy of the show," said director Matt Shakman.

The series centers around Wanda Maximoff, a.k.a. Marvel's Scarlet Witch, and Vision.

"I think the DNA through and through in our show is 100% Marvel," said Elizabeth Olsen, who plays Wanda. "I believe the way we are unravelling a story about these two characters is completely unique and unlike what we're used to."

"They appear to be in some sort of sitcom, and then they begin to realize that they're hurtling through the decades at breakneck speed week by week until Vision begins to think there's got to be something wrong here," said Paul Bettany, who plays Vision. "It's going to be incredibly satisfying for people who know and love--dyed in the wool Marvel fans--because they're going to get to see the Marvel Universe in a whole new light."

Along the way, the show pays homage to TV comedies of the past, including "The Dick Van Dyke Show," "Bewitched," "I Dream of Jeannie," "All In the Family" and "The Brady Bunch."