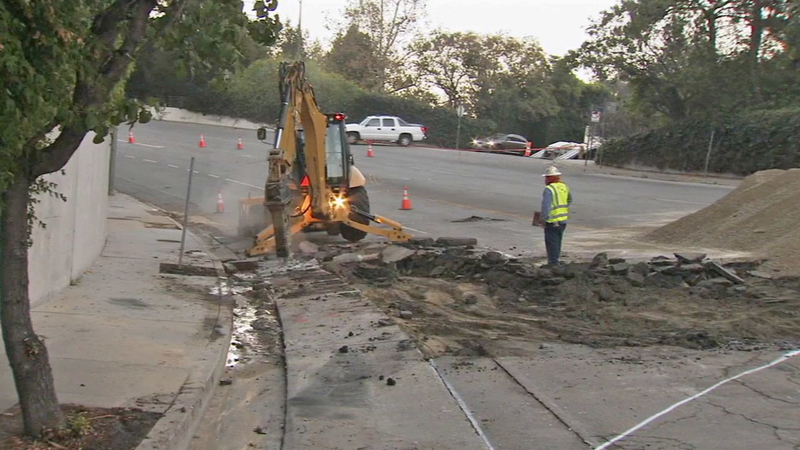 Sunset was shut from Charing Cross Road to Mapleton Drive following the rupture, which occurred near the Playboy Mansion at about 4 p.m. on Sunday. The Los Angeles Department of Water and Power initially said the road was expected to reopen at approximately 3 a.m. Monday, but repair work didn't wrap up until the afternoon.

The cast-iron pipe burst in the 10200 block of Sunset Boulevard near Charing Cross Road. It was unclear how long the water was flowing before it was turned off.

Twelve customers were impacted, including the Playboy Mansion, LADWP said. Authorities said service was back for most customers at around 8:30 p.m. Sunday.

This marked the second closure within two days on Sunset Boulevard due to a busted water main. Sunset was shut down Friday after a 36-inch pipe burst in West Hollywood during rush hour. Repairs were completed Saturday, but at least one lane of Sunset Boulevard between Olive Drive and La Cienega Boulevard was expected to be closed until Tuesday night.

Officials said the two ruptures were on different lines and do not believe they are related.

The 12-inch water pipe that ruptured in Holmby Hills was installed in 1969. The 36-inch main that failed in West Hollywood was installed in 1916. This has led many to believe that the DWP needs to invest more in its aging infrastructure.