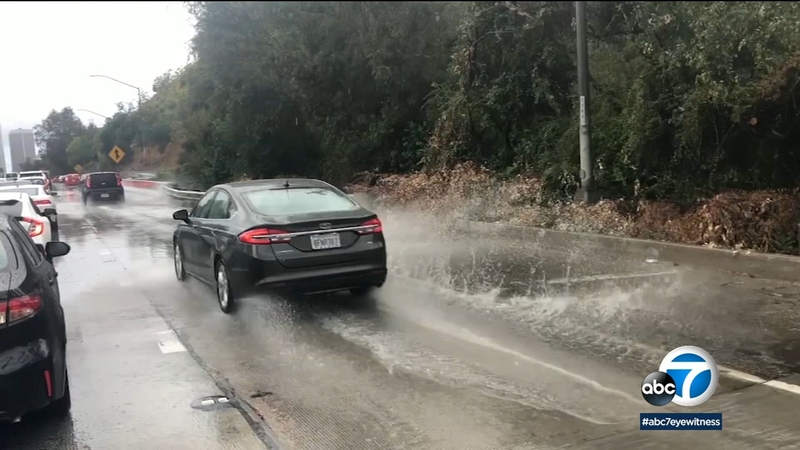 LOS ANGELES (KABC) -- The first major storm of the season made its way into Southern California on Wednesday, closing beaches in Santa Monica, pelting downtown Los Angeles with hail and dropping a fresh coat of powder on the mountains.

Residents and officials continued to keep a wary eye on recent burn areas amid fears of possible flooding and mudslides. There was no major flooding reported Wednesday during the daytime.

In Santa Monica, an electrical storm resulted in the closure of the beach and sand areas, according to the city's official Twitter account.

"If on the beach or on the Santa Monica Pier seek shelter indoors until the storm has ended," the tweet said.

Berms were in place at several local beaches, and sandbags lined vulnerable neighborhoods as forecasters predicted up to one inch of rain.

Light rain was seen in parts of Riverside and northern Los Angeles counties, while fresh snow was falling in the San Bernardino Mountains. Orange County remained mostly dry at the outset of the storm.

A flash flood watch was scheduled to last until 1 a.m. Thursday in Inland Empire communities from Temecula to Lake Elsinore, Hemet, Riverside and Yucaipa.

A winter storm warning was in effect until Thursday 7 p.m. in mountain communities to the east of that, around Yucaipa, Big Bear Lake and Crestline.

The National Weather Service says the most rain in the Los Angeles region was 1.61 inches that was measured near the San Gabriel Dam in Los Angeles County.

Downtown LA saw 0.63 inches, while in the San Fernando Valley from Van Nuys to Woodland Hills, only about 0.02 inches was recorded. Long Beach saw 0.38 inches.

ORANGE COUNTY
Communities in Trabuco Canyon in the Holy Fire burn area were issued voluntary evacuation warnings. Officials say the warnings are out of an abundance of caution.

The voluntary evacuation is for homes in the Trabuco Creek, Rose Canyon and Mystic Oaks / El Cariso areas.

Due to lightning the beach and pier are closed. Thank you for your cooperation. We will advise when they re-open. pic.twitter.com/L9CyHjYpsc

Orange County residents were urged to sign up for OC Alert to get the latest notifications.

In Seal Beach, lightning on Wednesday morning prompted police to briefly close the beach and pier.

Communities in Trabuco Canyon in the Holy Fire burn area were issued voluntary evacuation warnings as the first storm of the season hit the area Wednesday.

In San Clemente, the Mariposa Point beach trail was closed due to ongoing natural erosion. Some local residents were not happy about the closure, but said they understood that it's a safety concern.

The previous day, bulldozers were building a sand berm in front of beachfront homes. The 14-foot berm goes up every year, as the community learned its lesson in 2014 when swells from Hurricane Marie flooded homes along the boardwalk.

"If you go back historically we've had a lot of standing water back at the homes," said Chris Pierce, with the Seal Beach Marine Safety Department. "That's usually the result of high surf, rain event and high tides combined. When those three things come together we have seen a lot of standing water that has come back to the homes. In recent years though, we've been pretty on it to make sure that doesn't happen."

SAN GABRIEL VALLEY
Duarte and other communities along the 210 corridor were hit hard by fire and flooding a few years ago.

But this fire season they escaped most of the wildfires and the vegetation above vulnerable neighborhoods has grown back.

Communities along the 210 corridor that have seen flooding in past years didn't experience major problems with Wednesday's rain.

Some even welcome the rain.

"We need rain," said Duarte resident Taress Clark. "We live in California. I know in past years we've had a shortage of rain and the drought. We need the rain. Bring it on!"

INLAND EMPIRE
Residents in San Bernardino whose homes are along blackened hillsides are bracing for rain and possible debris flows.

Rain totals are not expected to cause wide spread flooding, but the potential is there. The San Bernardino County Fire Department will be monitoring hillsides for movement and have equipment and firefighters on standby.

"After the fires will always come the rains and that's a big issue because...it's harder to defend against the rain because you don't see it coming," said Jessie Carrillo of San Bernardino.

Carrillo was out surveying the area close to his sister's home Tuesday afternoon. He said even without a burn scar to worry about some areas are prone to flooding.

Residents in San Bernardino whose homes are along blackened hillsides are bracing for rain and possible debris flows.

"Anytime there is elimination of undergrowth you are going to get more water. We are just going to pray it isn't that bad," Carrillo said.

Other residents were not worried.

Mike Hatoum of San Bernardino said he hopes the rain will rid his street and home of the heavy smoke smell left in the wake of the fires.