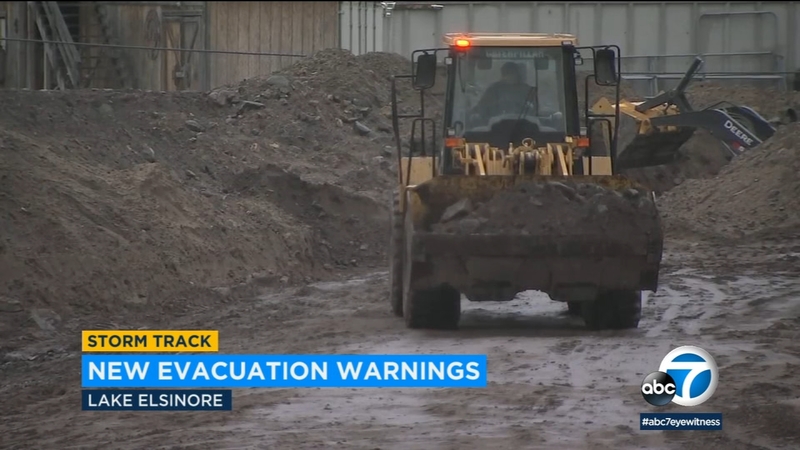 The areas under the mandatory order include:

The following zones remain under a voluntary evacuation warning:

-Alvarado A
-Lakeside A

The mandatory order is impacting nearly 5,000 residents. An evacuation center is open at Elsinore High School, located at 21800 Canyon Drive in Wildomar.

Riverside County officials said at-risk areas are subject to debris flow with little to no warning.

Meantime, officials are worrying about an evacuation burnout, which is when people are simply tired of having to leave their homes yet again.

Preparations are hard on the pocketbook when you're responsible for 11 horses like Sue Engelhardt on Brookstone Lane.

"It's expensive to move everybody, each evacuation, because you have to get new hay, pay for the fuel... we have to go get hotel rooms and everything else, so it's $1,000 every evacuation, so it's not cheap," she said.

And some horses, because of their age, don't handle the evacuations well. Some even stop eating, Engelhardt said.

Some decide to stay up through the night with the animals if the animals are too stressed to leave.

Lake Elsinore resident Shannon Akins said she's packed up and ready to go, just like the last dozen or so times they've been told to leave.

"I'm a continuous go-bag. I have four or five bags by my front door, and I just live out of those bags," Akins said.

The rain is expected to continue through Wednesday night and Thursday, which will see the heaviest downpours out of the whole system. The Inland Empire is expected to be hit the hardest between noon and 2 p.m. on Thursday.

There are also voluntary evacuation orders for the Cranston Fire burn area in Idyllwild, something that hasn't happened since Oct. 1.

For more information, call (951) 940-6985. For help with animals, call (951) 358-7387.
Report a correction or typo
Related topics:
weatherlake elsinoreriverside countyevacuationstormrain
Copyright © 2021 KABC-TV. All Rights Reserved.
TOP STORIES
Search resumes for Brian Laundrie in Gabby Petito case
Search continues for homeless man who slammed into LA pedestrian
Hollywood Burbank Airport shut down after person runs onto runway
Heat advisories issued for most of SoCal on first day of fall
Movie and film workers might be headed toward a strike
'No one would be spared': Debt default would set off dire consequences
California struggles to conserve water amid historic drought
Show More
Conor McGregor prompts comparisons to worst first pitches in history
Growing scam targets Bank of America and Zelle customers
Woman safe after video of possible abduction in Bell Gardens
When to expect decision on COVID-19 vaccine boosters
Who is running for mayor of LA? Here are the top contenders
More TOP STORIES News