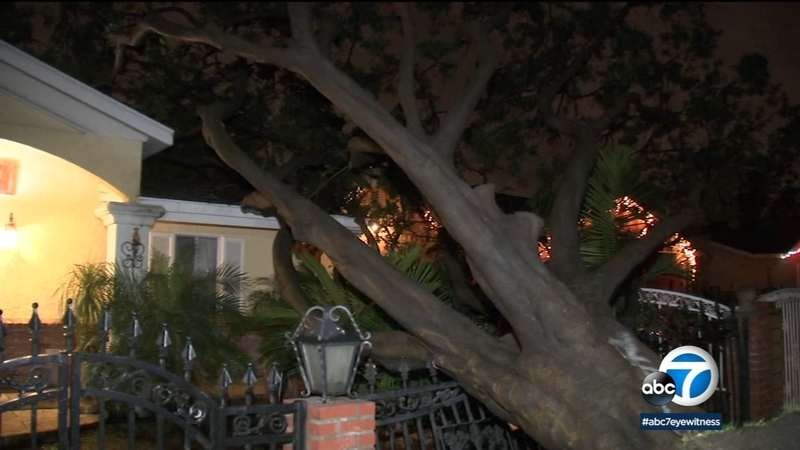 Scattered light rain and showers fell in the Los Angeles area by late Christmas afternoon, but the brunt of the storm hit about 9 p.m. Wednesday and was expected to continue through early afternoon Thursday. A winter storm warning remains in effect until 10 p.m. Thursday, according to the National Weather Service.

The storm brought not only snow, but strong winds, heavy rain and cold temperatures.

Torrential downpours prompted the closure of 118 Freeway near the 405 Freeway in Mission Hills. The closure was later canceled, but not before several drivers became stuck after attempting to cross the washed-out roadway.

The 710 Freeway near Highway 91 in Long Beach turned into a river, with multiple vehicles brought to a standstill as they attempted to barrel through standing water. The flooding prompted a nearly three-hour closure in both directions.

A man was rescued from the swift waters of the Sepulveda Basin after the storm brought depths up to 6 feet, officials say. The man was taken to an area hospital to be checked for hypothermia.

In Woodland Hills, where 2.39 inches of rain fell, a large tree uprooted outside of an apartment complex. The tree damaged the entrance of the building and blocked all lanes of Burbank Boulevard.

The winter storm may have also caused a tree in Lynwood to come crashing down on two families' homes in Lynwood.

"About 2, 3 in the morning, it was raining pretty hard at the time. Not sure when I heard the loud noise if it was lightning or a car crash. When I stepped outside, I was able to see a big tree on top of my house," homeowner Andy Cisneros said.

A young girl was sleeping in her bedroom where the tree struck the other house.

"My daughter was sleeping in the room and it just came down," homeowner Saul Zavala said. "Right now, it's being held up by the gate and the neighbor's car."

No injuries were reported in the Woodland Hills or Lynwood incidents.

Burn areas were warned to prepare for possible flooding.

The Ventura County Fire Department provided sandbags to residents in Simi Valley, where the Easy Fire scorched over 1,800 acres around Halloween this year. The agency is urging the public to plan and prepare for possible flooding in the area.

In the Getty Fire burn area, K-rails were lining Sepulveda Boulevard to prevent mud and debris from blocking the road.
In cities throughout the Southland, people enjoying their holiday were caught off-guard as they emerged from seeing movies or returning Christmas gifts and had to run from cover from the wind and rain.

"It's cold. It's wet," said Collin Larsh, who was at the Santa Monica pier as he visited town for the Rose Bowl. "It's pretty windy out on the pier. But I'm from Wisconsin, and this is better than that so can't really complain."
Report a correction or typo
Related topics:
weathersouthern californialos angeles countysan bernardino countywinter stormfloodingwintersnowrainwinter weathertrafficroad closureflash flooding
Copyright © 2021 KABC-TV. All Rights Reserved.
More Videos
From CNN Newsource affiliates
TOP STORIES