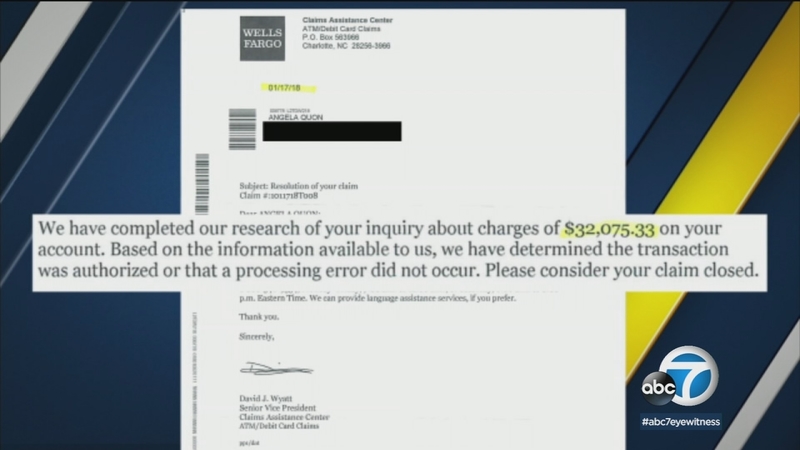 MORENO VALLEY, Calif. (KABC) -- A Moreno Valley woman said her bank account was plundered when her identity was stolen, costing her tens of thousands of dollars. She said the experience has been a nightmare.

"I feel like everywhere I go, I have to look (behind me)," Angela Quon said. "And I don't think that is right."

But Quon said the worst part is that her bank, Wells Fargo, hasn't replaced any of the money. She said it's been almost a year and a half, and nothing's been resolved.

"They feel they are not negligent," Quon said. "Even though they know they're negligent."

Quon claimed the fraudulent activity began in February 2017. She didn't find out about it until nearly a month later, when she said Wells Fargo sent an email to her son alerting him of insufficient funds to cover transactions in the account.

By the time she discovered what had happened, she said someone had fraudulently obtained a debit card for the account and made nearly 500 transactions, totaling more than $32,000.

"I don't spend money like this," Quon said, with a laugh.

The transactions came out to 14 purchases at Walmart, 46 purchases at Target and 177 Uber rides in one month's time.

"I didn't go and spend any of this money," Quon said. "I've never even been sent an Uber before in my life."

There were online gambling purchases, fast food purchases, gasoline purchases and hotel room rentals. There was even a storage unit rental. When asked when the fraudulent transactions stopped, Quon's answer was brief.

"When there was no more money," she said.

Quon said whoever obtained the debit card would simply transfer money from another one of her accounts when the balance got too low. She said they also deleted her driver's license information on her account and changed her email address and phone number on file.

She first reported the case to Wells Fargo's fraud department as soon as she realized the fraudulent transactions.

"The person who took my call said, 'Mrs. Quon, don't worry about it because since this is fraud, everything will be returned back to you' if you didn't do it," Quon said.

The next day, she filed a police report. Quon said the charges are obviously fraudulent because they were all made using a debit card and she said she never even asked for a debit card on her account.

She said at one point, a Wells Fargo branch manager called the new phone number on file while Quon was in the bank. Quon said she heard the entire call, which was brief.

At that point, Quon said the manager simply hung up. That was in March 2017. Fifteen months later, she said the problem still isn't resolved.

Earlier this year, she received a letter from the Wells Fargo claims assistance center.

The first paragraph of the letter read: "We have completed our research of your inquiry about charges of $32,075.33 on your account. Based on the information available to us, we have determined the transaction was authorized or that a processing error did not occur. Please consider your claim closed."