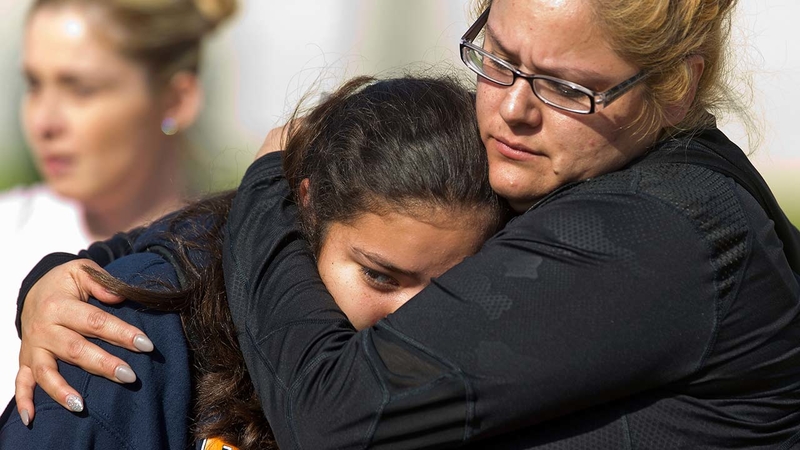 Gun in Westlake school shooting went off in backpack

Prosecutors filed one felony count each of minor in possession of a firearm and weapon on a school grounds against the girl.

The gun used in the shooting appears to have discharged a single round from inside a backpack, police said.

Los Angeles police said according to the evidence, the gun appears to have fired one bullet from inside the backpack of the young girl.

Students at Sal Castro Middle School returned to school on Friday amid extra security and crisis counselors a day after a shooting left two teens injured.

The bullet struck two students - a 15-year-old boy in the temple and a 15-year-old girl in the wrist. Investigators believe the trajectory of the bullet traveled through the wrist of the female student and then struck the head of the male student.

The handgun was not registered. Detectives are still trying to figure out where the girl got the gun and how it was brought into the school.

She was booked into juvenile hall Thursday night on suspicion of negligently discharging a firearm on school grounds.

Doctors said the bullet that struck the boy in the head didn't hit anything vital and his injuries are not life-threatening.

Two other children and a staff member were hit by broken glass. All were expected to make a full recovery.

"Everybody was scared. Everybody was thinking about their families and all that," said Anderson Alvarez, a student.


Anderson was among the students who walked back through the school gates Friday just steps away from the second-floor classroom where the shooting happened.

Parent Maria Serrano gave her daughter a hug and said she thought about keeping her home - at least for one day.

Student Arianna Cortez said her friends were in the classroom when the incident occurred.

"They told me it was an accident and that she was just showing it off and I guess that happened," she said.

Anxious parents were reunited with their children following a shooting at Sal Castro Middle School.

However, Arianna also said she and others believe there may have been more to it.

"She would get bullied a lot, and I think it just kept building up in her," she said.

Along with an increased presence of school police officers, more than 30 crisis counselors were on campus Friday to help any students who were struggling emotionally.

"Some students are numb, some are distracted and very hyper alert, and some were trying to really notice which children need extra support and engage them in the instructional day," said Pia Escudero, the school's mental health director.

Parents also attended a meeting with school and law enforcement officials to learn more about what happened.