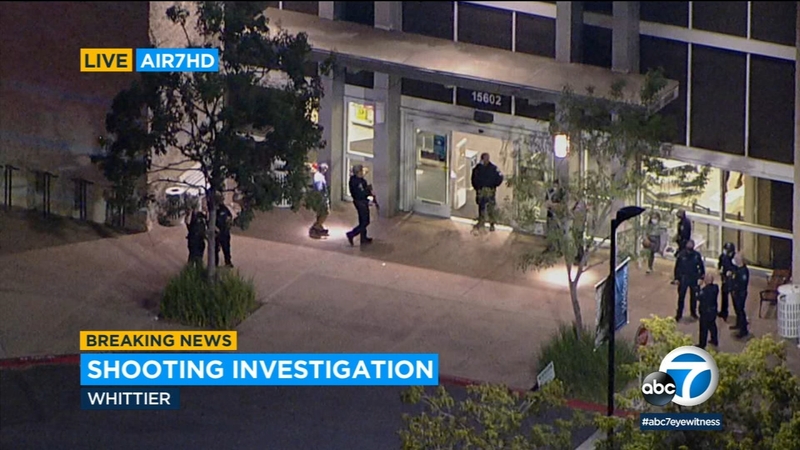 WHITTIER, Calif. (KABC) -- Whittier police have arrested a suspect in Tuesday night's fatal shooting of a woman at a Kohl's store.

The suspect was identified as Enrique Acosta, 41, of Whittier. Some time after the shooting he was located in the Barstow area and taken into custody without incident. He was brought back to the Whittier jail to be booked for murder and is being held on $1 million bail.

The shooting was reported around 5:30 p.m. Tuesday at the Whittwood Town Center. Police said a woman was killed and the suspect fled the scene.
EMBED More News Videos

Police are searching for a suspect who fled the scene of a fatal shooting at a Kohl's store in a Whittier shopping complex Tuesday night.

Acosta's relation to the victim and motive were not immediately disclosed but police initially described the shooting as the possible result of a domestic dispute.

Witnesses said the victim was checking out near a register with a child as the store was full of holiday shoppers when she got into an argument with a man. The shooter was heard saying something to the young boy along the lines of "I just shot your mom and now I'm leaving."
Report a correction or typo
Related topics:
whittierlos angeles countymallgun violencehomicideshootingdomestic violence
Copyright © 2022 KABC Television, LLC. All rights reserved.
TOP STORIES
Father of UCLA grad student stabbed to death at her job speaks out
Website for free COVID tests is here. How does it work?
Family seeks justice for teen found dead along freeway in South LA
French actor Gaspard Ulliel dies after ski accident
Suspect identified in murder of 24-year-old woman in Hancock Park
Gov. Gavin Newsom offers college students $10,000 for public service
Felony charges are 1st in a fatal crash involving Autopilot
Show More
Sandra Shells: Vigil for nurse fatally attacked at DTLA bus stop
Project presents diplomas to veterans and their families
Fashion icon André Leon Talley dies at 73
Airlines worldwide rush to change flights over US 5G problems
Giuliani among Trump allies subpoenaed by Jan. 6 panel
More TOP STORIES News