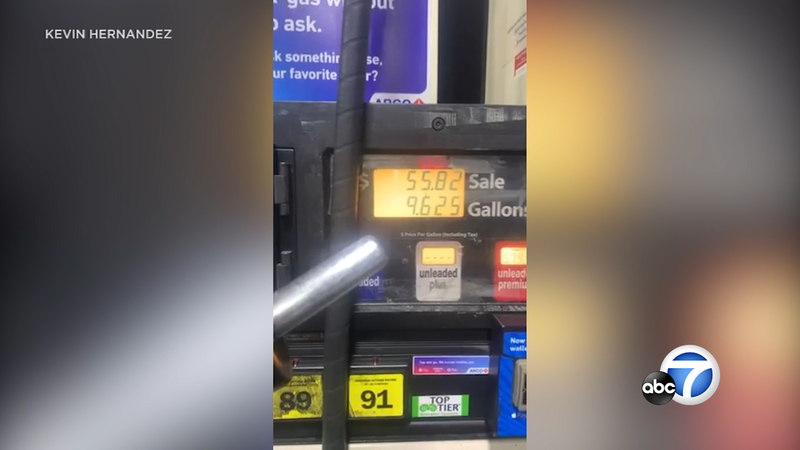 SOUTH GATE, Calif. (KABC) -- Video shows a price ticker at a gas pump in South Gate keep moving up cent by cent, even as the nozzle is out of the tank and not dispensing any gas. The Florence-Firestone couple captured the moment as they pumped gas Sunday night.

"We went to pump gas. [My husband] was putting gas and then he was calling me like 'Come look at this. I am not pumping gas anymore and the machine is still running, it's still charging me.' We were so surprised that was happening so I told him to record it," said Jacqueline Herrador.

Herrador said this happened at the Arco gas station on the corner of Firestone and Long Beach boulevards. They ended up getting overcharged by about $6.

"He also went inside to talk to the cashier to let them know what was going on. But the cashier just said that he couldn't do anything," said Herrador.

According to Herrador, they left their contact info and was told a manager would call them.

On Tuesday, her husband, Kevin Hernandez, went back to the same pump, pump seven, to test if it was fixed and it wasn't. He recorded a second video and told the cashier again. Hernandez said he reported it to Los Angeles County Weights and Measures. He also wanted to spread the word to the community.

"He contacted [the] Facebook page, the South Gate Facebook page to let them know what was going on because we didn't want this to happen to anyone else," said Herrador.

Thomas Buckley is the founder of the Facebook group South Gate Police Scanner, where the videos were posted.

"An employee reached out to me anonymously from this location and stated that indeed there was a fuel pump leak in the hose and they had a technician look at it," said Buckley.

Herrador said the manager called them back to apologize for the inconvenience and gave them a $25 gift card.

"This is really concerning because how many other people were charged extra that shouldn't have had to pay. I mean the gas prices are outrageous," said Buckley.

As of Wednesday, the pump was open and customers were using it. A worker at the store told ABC7 the manager declined to do an interview because he said everything is OK now.