Why is Beijing going out of the way to endorse deeply unpopular Carrie Lam? 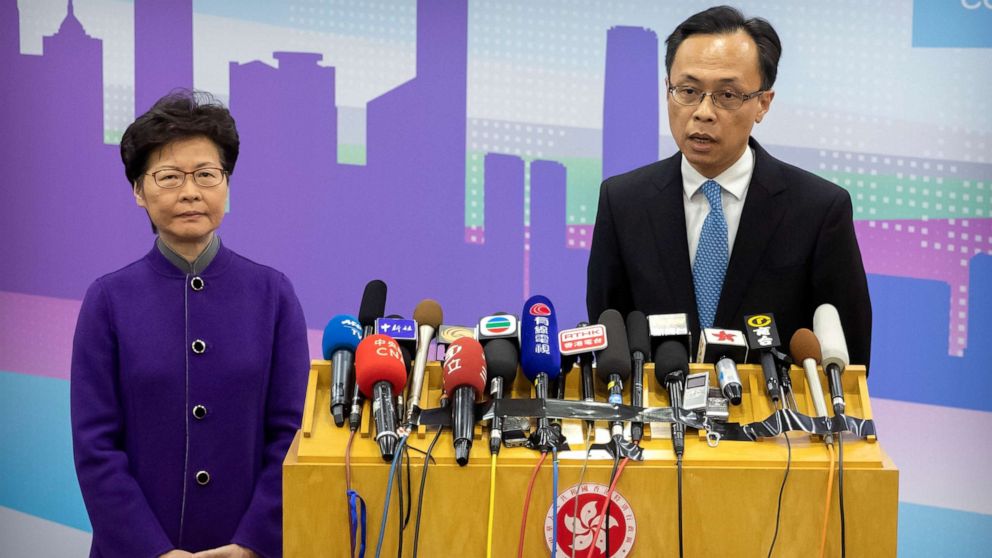 Beijing -- After weeks of reports that the Beijing was searching for a replacement for deeply unpopular Hong Kong Chief Executive Carrie Lam, the embattled leader received what appeared to be a warm welcome and a ringing endorsement by the Chinese leadership this week in Beijing and Shanghai.

Lam had always been scheduled to attend the annual China International Import Expo in Shanghai this week but was suddenly summoned to Beijing at the last minute after the Expo to meet face to face with the senior Chinese leader in charge of Hong Kong affairs.

The Chinese Communist Party had just concluded a leadership conclave where the issue of Hong Kong was undoubtedly discussed.

A senior Chinese official even mentioned on Friday that Beijing has made a decision to "improve the system and mechanisms of how the central government appoints and removes chief executives and other main officials" in Hong Kong and neighboring Macau.

That statement suddenly ignited speculation about Lam's fate and that she may not be long for the job.

However, that all changed when she was again asked suddenly, by her own accounts, to a last minute meeting on Monday evening in Shanghai; this time with Chinese President Xi Jinping himself.

It was the first official meeting between the Chinese leader and Lam since protests and civil unrest began rocking Hong Kong in early June.

The smiles on both of their faces were telling: Xi was endorsing Lam and signaling that she is not going away, at least for the time being.

"The central government has a high degree of trust in you, and fully affirms the work that you and your governing team put in," President Xi told Lam, according to a Chinese state media readout of the meeting. Xi said that Lam has done "large amounts of arduous work" in trying to stabilize the situation.

The sentiment was echoed when she met with Vice Premier Han Zheng at the Diaoyutai State Guesthouse in Beijing on Wednesday morning.

Han said that Lam has tried everything possible to stabilize the situation in Hong Kong and has carried out a "huge amount of tough work." He reiterated that Beijing will continue to fully support the Lam's government and the Hong Kong Police Force in restoring order to Hong Kong.

Since the protests began in June over Lam's push for the now-withdrawn extradition bill, her approval ratings have tanked, making her the most unpopular leader since the former British colony returned in China in 1997. A recent public opinion poll places her popularity at just 20.2% with only 11% of those polled saying that they would vote for her if given a vote. She was polling at above 50% as late as March of this year.

Having long been seen by critics as just a proxy or, at best, an implementer for Beijing, protesters initially called for Lam's resignation as a part of their demands but have since conceded that whoever Beijing replaces her with will be more of the same.

Instead, as the protest movement morphed from being about the extradition bill to advocating for democracy, the protesters have demanded the Hong Kong Government -- and by extension Beijing -- grant Hong Kong residents a direct vote for their leader and members of the legislative council.

Currently, Carrie Lam's position is chosen by a 1200-member election committee that has been disproportionately stacked with Beijing loyalists. The 2014 Umbrella Movement protests that occupied the Hong Kong streets for 79 days erupted after Beijing said they would need to vet the candidates before they can stand for a general election.

Ultimately, that deal, which would have allowed Hong Kong residents one-man-one-vote for a Beijing-vetted candidate, was blocked by the pro-democracy camp and the selection of the Hong Kong Chief Executive remained with the small committee.

Beijing's ringing endorsement of Lam this week may not mean she's secure for the long run. Her five year term technically runs until 2022.

If Beijing had decided to remove Lam it would have immediately put the process of finding her replacement or successor on the table.

With a local election coming up at the end of the month in Hong Kong that has already been marred by political violence, Beijing's gambit may be that Lam is likely their best and maybe only option for stability at the moment.
Report a correction or typo
Related topics:
abc newsnational
Copyright © 2020 ABC News Internet Ventures.
More Videos
From CNN Newsource affiliates
TOP STORIES