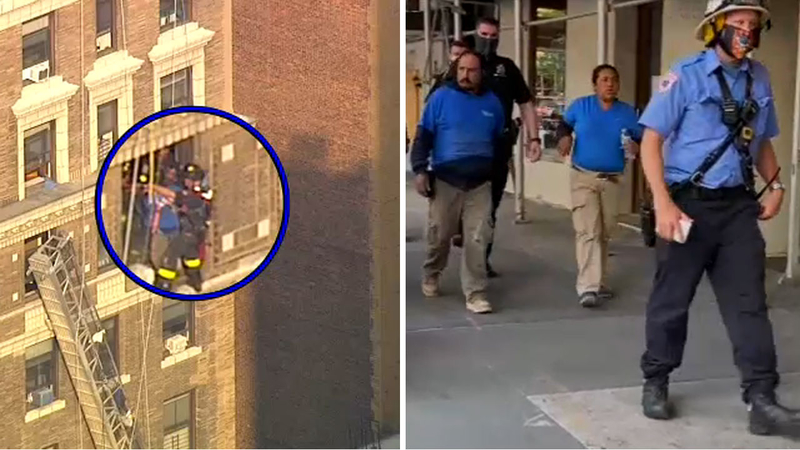 2 workers rescued from 10th floor after scaffolding gives out

NEW YORK -- The FDNY came to the rescue of a pair of construction workers stuck on the 10th floor of a building when their scaffolding gave out.

The incident was reported Tuesday at a building on 78th Street and Broadway at 4:30 p.m.

One side of the rigging that the workers were on gave out while they were doing facade work on the exterior of the building.

Firefighters were able to move a woman into a window easily, but a man was left clinging to the ledge -- his safety harness was too taut and stretched to move anywhere. Firefighter Andrew Dinkel repelled down from the roof to rescue him.

Other firefighters could be seen in the floors above and the floors below where the rigging let loose.

Firefighters pulled the man into the building.

Dinkel remained calm and cool throughout the rescue.
Video from above showed the moment the second window washer was brought inside to safety.

A rescue is underway to save two window washers from a building on the Upper West Side.

Witnesses said both workers held onto their safety ropes for about 5 to 10 minutes before rescuers arrived.

"It was a very good operation by all three units and it showed a lot of teamwork and both victims are both workers who were taken to the hospital with minor injuries, so we had a very successful outcome" an FDNY official said.

Officials with the New York City Department of Buildings were on the scene to investigate the incident.