Woman in custody after climbing base of Statue of Liberty 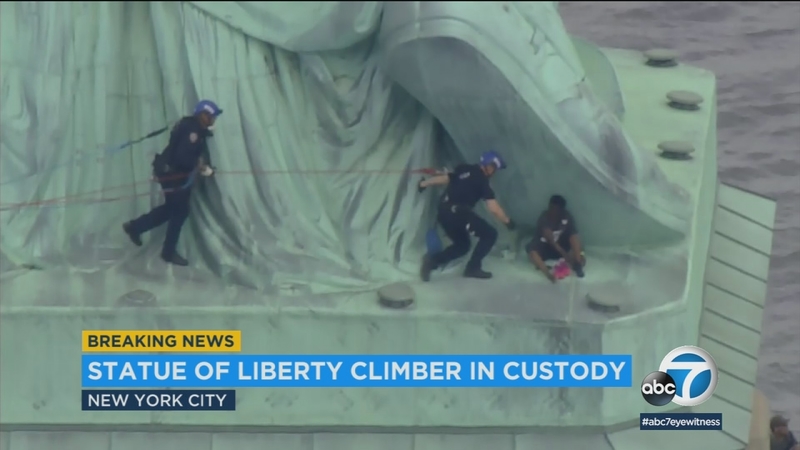 Woman in custody after climbing base of Statue of Liberty

NEW YORK -- After more than two hours, police have apprehended a woman who climbed the base of the Statue of Liberty.

U.S. Parks Police evacuated Liberty Island after the woman, identified as Therese Patricia Okoumou, 44 of Staten Island, climbed to the base of the statue.

She occasionally moved around the base and waved a T-shirt at times. At other times she was seen lying on her stomach and kicking her feet up behind her.
The climber was holding a T-shirt that says 'Rise and Resist' and 'Trump Care Makes Us Sick.'

Police officers were seen scaling the base of the statue with a ladder. They appeared to be talking with the woman. Eventually they were able to take her into custody and bring her down.

NYPD Detective Brian Glacken said she was talking about the children in Texas. At first, he says Okoumou was not friendly with them, but they got a dialogue going with her so she could trust the officers.

"The turning point was once we could safely go up. You know, I explained to her that we want you to come down that would be the best way. I think the turning point was we had a good rapport with her. And when we got her she couldn't go any further and I think she realized that her time was up up there," said Detective Glacken.

Meantime, visitors were taken off the island via ferry.

"We've had two unusual events occur back-to-back," National Park Service spokesman Jerry Willis told ABC7's sister station, WABC-TV. "So for the safety and security of our visitors, we decided to evacuate for the day."

"It's our busiest week of the year, historically," Willis continued. "The island at this time of the day is mostly near capacity, at 4,000 to 4,500 people. All boats have been tasked with moving people off the island. We have an evacuation plan. Given the heat of the day, the visitors complied with no issues."

Reports of a person scaling the statue started coming in around 3 p.m. Wednesday, shortly after a protest group calling itself Rise and Resist dropped a banner that read "Abolish ICE" from the base of the statue.

That demonstration was organized to protest the Trump administration's immigration policy, the group said in a press release.

The group initially said the woman who climbed to the base of the statue was not involved in the "Abolish ICE" protest. However later members said they learned of her identity and realized that she was someone involved in the group. They said she had not been sent or authorized by the group to climb the statue.

Okoumou will appear in Manhattan Federal Court on Thursday.

She is expected to be charged with national park regulations or public use limit; trespassing; disorderly conduct, and interfering with government functions. All are federal misdemeanors.

"The person who climbed the Statue of Liberty was one of forty participants in our planned banner action, but her decision to climb the statue was made independently of the group, without consulting any other member of the group. We understand and share her desire to see the immediate release of children from detention and reunion with their parents. We hope that her legal representation will arrange for her release under her own recognizance."
Report a correction or typo
Related topics:
new yorkstatue of libertyprotestillegal climbingu.s. & world
Copyright © 2021 WABC-TV. All Rights Reserved.
TOP STORIES
SoCal man, 34, who mocked vaccines dies of COVID-19
Mother arrested after 2 young kids left in hot Bakersfield car
Police officers save woman dangling from Vincent Thomas Bridge
Vaccines are 'personal decision,' Hillsong Church founder says
Black car buyer's experience marred by dealer's 'racist' Facebook post
OC sheriff investigating death of man found in lake
Bumble match turns in Jan. 6 suspect who allegedly whipped police
Show More
Search for bodies concludes at FL condo collapse site
Woman who alleges sexual abuse by foster family suing LA County
Britney Spears court fight reflects disability rights issues
Journey to Japan: Exclusive look as country prepares for Olympics
Tokyo Olympic Stadium isn't just an arena - it's a message
More TOP STORIES News