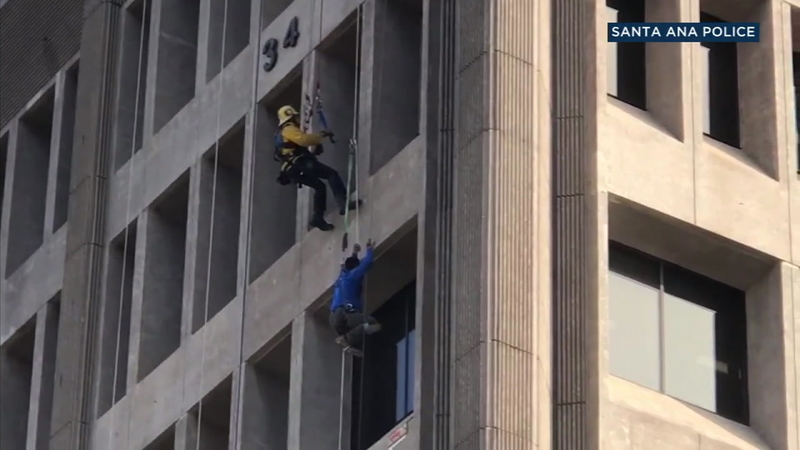 SANTA ANA, Calif. (KABC) -- Crews safely rescued a window washer who was dangling from the seventh floor of a federal building in Santa Ana on Tuesday.

The man was spotted hanging on by safety rope at 34 Civic Center Plaza in the 700 block of W. Santa Ana Boulevard at about 8:30 a.m.

The Orange County Fire Authority said the engine on the worker's scaffolding broke and sent it to the ground. The man was locked in place by his safety harness while waiting for help.

Technical rescue crews responded to the nine-story building and set up a special rope system on the roof to send a firefighter down to the worker.

"We just kind of were communicating to him through the window, as well as from over the top on the side, and just kept updating him to our progress, and he remained calm the whole time and our guys could just kind of get to work," said OCFA Battalion Chief Craig Covey.

The rescuer and the man made it to the ground safely shortly before 9 a.m., and paramedics made sure he had no injuries.

Firefighters said everything went exactly how it should in a tense situation like this.

"It's a great day today, right? We got to save a life," Covey said. "He did what he was supposed to do in having his safety backup redundant system, and our guys who train at this all the time were able to go up and effect a rescue - that's what we live for, so it was a great day for us and for him."
Report a correction or typo
Related topics:
santa anaorange countyrescuefreak accident
Copyright © 2021 KABC-TV. All Rights Reserved.
TOP STORIES
LA County issues order requiring all county employees to be vaccinated
LA to consider requiring vaccination to enter public indoor spaces
Corona shooting suspect blames voices in his head
Man steals truck after getting out of Glendale jail, police say
Driver kills 91-year-old woman in South LA, flees scene
10 killed when van crashed into pole near border, DPS says
Child under 12 among new COVID deaths reported in LA County
Show More
SoCal congressman introduces legislation for 4-day workweek
Mexico sues U.S. gunmakers, blaming them for bloodshed
Man arrested for planting Molotov cocktails at Metro station
Nursing home to workers: Get vaccine or lose your job
Race track construction begins for Acura Grand Prix
More TOP STORIES News