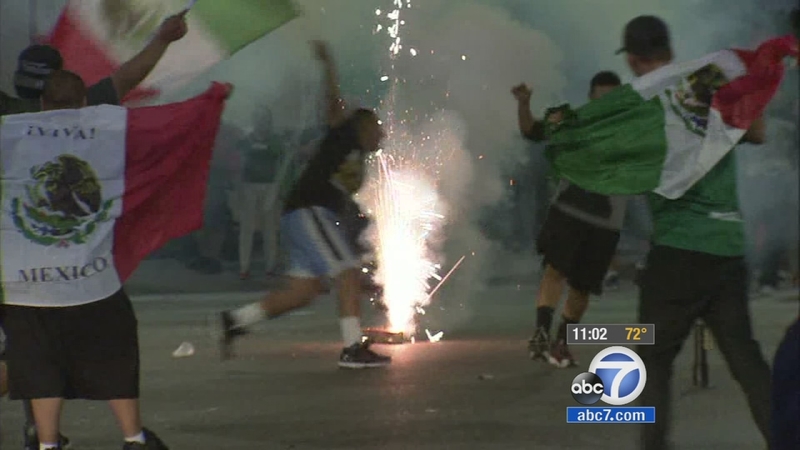 PACOIMA, Calif. (KABC) -- World Cup fever turned to chaos as hundreds of unruly soccer fans hit the streets of Huntington Park, East Los Angeles and Pacoima to celebrate following Mexico's advancing to the second round of the World Cup Monday.

At least 13 people were arrested or detained across Southern California as a result of the rowdy celebrations.

LAPD declared a citywide tactical alert around 10:15 p.m. in an attempt to handle crowds in Pacoima as they blocked intersections, jumped on cars and even set off fireworks.

Shortly before 10:40 p.m., an LAPD officer issued a dispersal order over a loudspeaker. Law enforcement officers then moved in and forced the crowd gathered near the intersection of Laurel Canyon and Van Nuys boulevards to disperse.

At least seven people were detained before the citywide tactical alert was cancelled. LAPD's Foothill Division declared a "peaceful end to the unlawful assembly" around 11:30 p.m.

California Highway Patrol officials were initially forced to close off- and on-ramps on the 5 Freeway for Van Nuys Boulevard and Osborne and Terra Bella streets. The Laurel Canyon Boulevard from the 118 Freeway was also closed, but reopened around 11 p.m.

At least four people were taken into custody as people darted in and out of traffic near Florence Avenue and Pacific Boulevard in Huntington Park around 3:30 p.m. Police say one woman was arrested for throwing a bottle at a sheriff's deputy, another for refusing to leave the area and two for public drunkenness.

A woman was arrested after a World Cup celebration in Huntington Park Monday, June 23, 2014 grew rowdy and poured into the street.

A man was arrested after a World Cup celebration in Huntington Park Monday, June 23, 2014 grew rowdy and poured into the street.

Pacific Boulevard was closed in both directions between Florence and Gage avenues as police restored order on the streets with the help of L.A. County sheriff's deputies.

Most of the dozens of fans who waved Mexican flags and celebrated on streets and sidewalks on Monday afternoon were peaceful. The crowds thinned by sundown, but police and sheriff's deputies in riot gear and on horseback worked to disperse the crowd when some grew unruly, blocking traffic and shaking some vehicles.

Thousands had gathered at Plaza Mexico in Lynwood to watch Mexico beat Croatia 3-1 and advance to the World Cup's knockout round. Many of them then drove into Huntington Park to continue the celebration.

Crowds also gathered near the intersection of Whittier Boulevard and Arizona Avenue in East Los Angeles, but there were no reports of any major disruptions.

Los Angeles police say they don't mind the celebrations, as long as fans remain calm and abide by the law.

Mexico will play the Netherlands in the knockout round on Sunday.