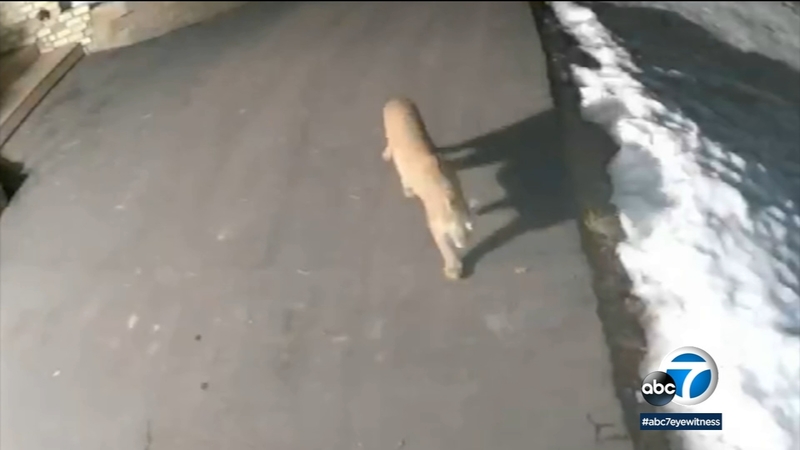 WRIGHTWOOD, Calif. (KABC) -- Mountain lion sightings are not uncommon, especially after dark. But recent nocturnal visits to one neighborhood in Wrightwood is causing a lot more concern.

"I grabbed my flashlight and noticed that on the other side of the fence line was this at least 200 pound mountain lion. I have never seen a mountain lion before, so it was kind of a shocker," said Wrightwood resident Rudy Salazar.

Salazar has lived in the mountain community for 15 years, but this close encounter was his first. He says he didn't realize how close until the next day when he noticed his dog, Rosie, was injured.

An Orange County park has been closed after a family hiking in the area said they spotted a mountain lion stalking a young girl in the group.

"From the collar line to underneath," Salazar said, describing the large wound and missing flesh torn from Rosie's chest area.

"It didn't keep her from barking and trying to go after this animal," he said.

Salazar believes the same mountain lion is behind several other attacks in his neighborhood and that the Bobcat Fire in September is to blame for the cougar's moving closer to populated areas.

"There is nothing in the burnt area for them to eat, so I believe they are coming into town finding food sources and unfortunately, it is our pets that are their meals," said Salazar.

A cougar likely burned in the Bobcat Fire is finally on the mend after she turned up in a backyard in Monrovia.

He and other residents told Eyewitness News they understand they are co-existing with the mountain lions. Some residents have even called around to sanctuaries hoping to relocate the animal for its safety.
"Really the only long-term solution to prevent any unwanted interactions with pets is to prevent access to vulnerable pets. So that means keeping pets on a leash while they're outdoors, bring pets inside at night," said Tom Batter with the California Department of Fish and Wildlife.

Batter said he doesn't believe the recent fires have driven mountain lions into Wrightwood since the community is part of its natural habitat. He advises residents and visitors to not only keep an eye on their animals but to enclose them in a protected space if left unattended outside.

As for Salazar, he no longer allows his dogs to come and go outside alone and he's added additional safety measures around his property.

"I've add four sensor lights, so I can see what is out there," he said.