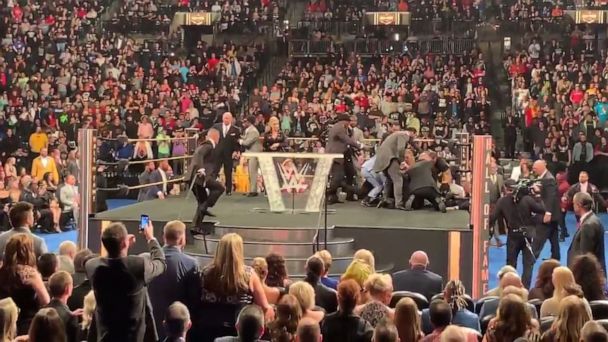 A 26-year-old man was arrested on Saturday for slugging WWE legend Bret "The Hitman" Hart in the face as he was making a Hall of Fame speech at the Barclays Center in Brooklyn, New York, police said.

As Hart was accepting induction for the second time - this time as part of the tag team The Hart Foundation, along with the late Jim "The Anvil" Neidhart - a fan rushed into the ring and punched him.

The live broadcast on the WWE Network was interrupted as several people, including many wrestlers, rushed in the ring to pull the man away from Hart, who was alongside Neidhart's daughter, Natalya. Natalya, who is a WWE wrestler herself, was also slung to the ground during the skirmish.

"An over-exuberant fan surpassed our security at ringside and made his way briefly into the ring," WWE later said in a statement obtained by ESPN. "The individual has been turned over to the proper authorities."

Natalya, whose real name is Natalie Neidhart, responded to the attack after the ceremony, saying her uncle "didn't deserve to be attacked or have his moment or my dad's diminished." Jim Neidhart died suddenly last August.

Security and a host of wrestlers, including Hart's nephew Davey Boy Smith Jr., held down the unidentified man until police arrived and took him into custody. Smith tweeted the man was "lucky I was being held back."

The suspect was taken to the 78th Precinct, just blocks from Barclays Center, and charges are pending.

Hart, 61, was able to finish his speech.