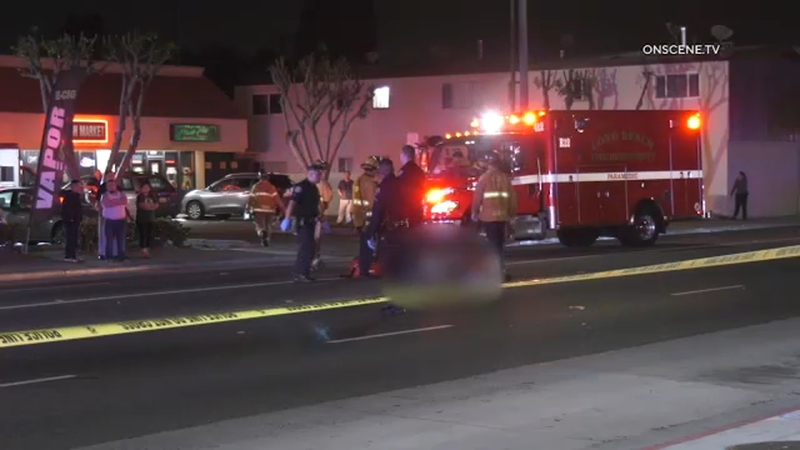 LONG BEACH, Calif. (KABC) -- A suspect with a shotgun is dead after shooting and wounding two people and then exchanging gunfire with officers in Long Beach, police said.

One officer exchanged gunfire with the suspect and another struck him with a police cruiser after he fired at least two shots at the vehicle, hitting it twice, according to Long Beach Police Chief Robert Luna.

It was not immediately clear if the suspect died from gunfire or from being struck by the police cruiser.

The incident started around 9:20 p.m. in the area of Atlantic Avenue and Market Street.

Police said the suspect first shot a person outside a Popeyes restaurant on Atlantic.

He then allegedly shot another person at a liquor store nearby.

As the suspect came out of the liquor store, the first officer on scene confronted him and they exchanged gunfire. As that was happening, a second officer drove up and the suspect fired at the marked cruiser, hitting it with two rounds, Luna said. That police vehicle then struck the suspect.

The person who was shot at the Popeyes was struck several times and was in critical condition at a local hospital.

The second person who was shot was in stable condition at a hospital.

An officer was also transported to a local hospital for evaluation and treatment, Luna said. It is not believed the officer was struck by gunfire, but the exact nature of the injury was not immediately clear.

A shotgun with a pistol grip was recovered at the scene close to the suspect's body. Police later released photos of the weapon and of the cruiser's damaged windshield.

Luna said the motive for the original two shootings was not immediately clear.

"That's why we have a lot of detectives out here," Luna said. "We have a lot of witnesses to interview and put what seems to be a pretty complicated puzzle together about what happened."
Report a correction or typo
Related topics:
long beachlos angeles countygun violenceofficer involved shootingshooting
Copyright © 2021 KABC-TV. All Rights Reserved.
More Videos
From CNN Newsource affiliates
TOP STORIES