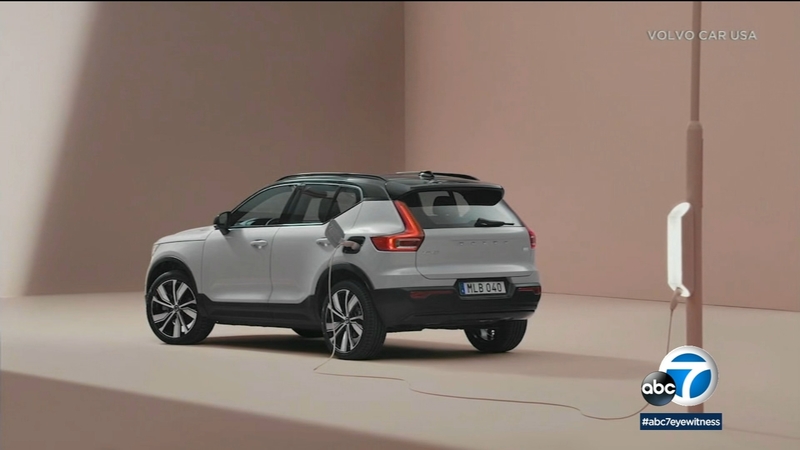 It's been in the news a lot this year: the tentatively-planned future of the automobile is electric power. And that's also the announced future of Volvo.

First up was the Volvo XC40 Recharge, an all-electric version of their conventional compact SUV that went on sale earlier this year for a base price of $53,990 before any incentives or tax credits. Their next EV was recently revealed, the C40 Recharge.

"The C40 is our very first electric-only car. This has never been, and never will be, a gasoline-powered vehicle. Only electric," Datz noted.

And so it begins: fully-electric cars from the famous Swedish brand. Though it can get a little confusing, because there's already an all-electric Swedish car brand launched last year called Polestar. Their early lineup somewhat resembles Volvo's current design language, because Polestar is a close relative of - and partially owned by - Volvo.

"Volvo will always be about safety, and Polestar will be about performance," said Datz, clarifying the mission of the two linked nameplates.

Whenever a new electric vehicle launches, one of the first questions that comes up is "What's the driving range?" For the XC40 it's officially 208 miles, according to the EPA. The C40 should offer similar numbers when it goes on sale in early 2022.

You may see a new Jeep that certainly looks like the iconic Wrangler, but it sounds different. That's because the new Wrangler 4xe model can run on electricity.

But it's not always about ultimate range, notes Volvo. Many people over-estimate how far they go at a time, with most Americans commuting about 26 miles per day. Charging at home overnight yields a full battery in the morning, and Volvo says public charging infrastructure is growing all the time.
Getting people used to new technology is always a challenge, and right now nearly the entire auto industry is going through a transition to electric vehicles. To help people get used to having an electric car, Volvo has added some technology in theirs, that you may already use every day.

Volvo has partnered with Google, a service most people are familiar with, to assist with things. Each new XC40 Recharge, as well as the upcoming C40 Recharge, has Google technology built right into the infotainment system, along with an app for your phone.

The Google Assistant is not just for navigation, but all aspects of using the car, from checking on charging, to adjusting the climate control. It's all just a "Hey Google" voice command away.

Volvo will still make conventional gasoline-powered cars for the time being if you prefer, including plug-in hybrids. But eventually, you might be sold on the alternative technology.

"Go drive one. It's one of those things where you get in the car and you drive, and you say 'Where have you been all my life?'" Datz said.

Ford revealed the fully electric F-150 Lightning at an event, in a moment that could herald the point at which electric vehicles go truly mainstream.