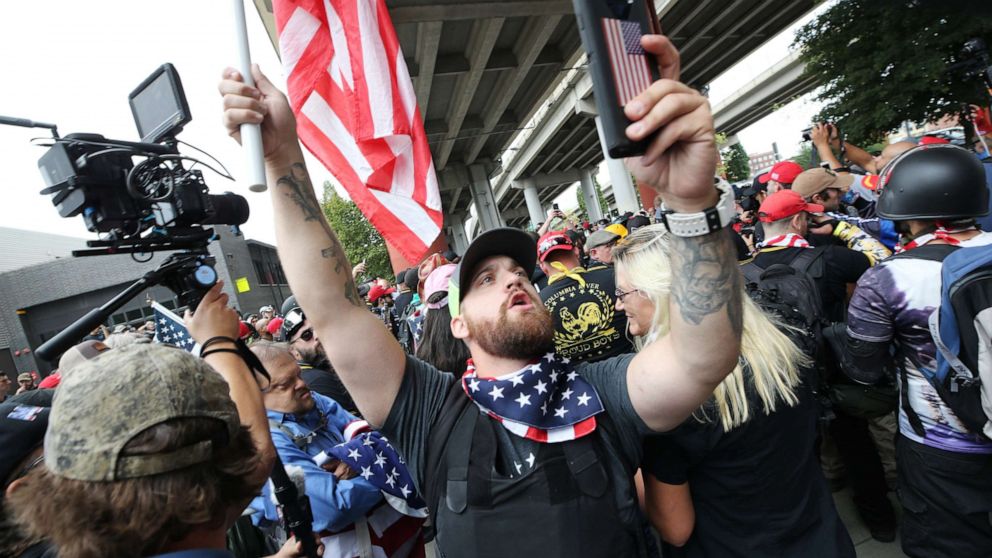 ABCNews
By SOO YOUN
Thirteen people were arrested and six were injured, as over 1,200 right-wing demonstrators and counterprotesters descended on downtown Portland on Saturday, police said.

Portland Police Lt. Tina Jones said there had been at least 13 arrests, while at least one person had been take to the hospital with injuries. In addition, officers confiscated a number of weapons, including knives, shields and stun guns.

Portland Mayor Ted Wheeler said that he was pleased that police were able to keep the city safe while also helping to "protect the core American value of free speech."

Police said none of the injuries were caused by officers. There was one incident where police deployed pepper balls, authorities said.

Ahead of Saturday's rallies, Wheeler issued a video message stating, "if you're planning on coming here on Aug. 17 with the intent to commit violence, we don't want you here."

Jessyca Jones, a counterprotester who was on the streets on Saturday, told ABC News the environment was "tense" and that there had been "lots of fights."

At around 4:30 p.m. local time, and the Portland Police tweeted, "Police are having plastic water bottles thrown at them as they are making an arrest on SW Yamhill and Park." After that, police began advising people to clear the streets or face arrest.

"Police are advising this is now a civil disturbance. Crowd needs to leave the area and go Northbound on Park or any direction eastbound. This means everyone," Portland Police tweeted.

The city has been bracing for several militant right-wing groups to arrive in the city, along with scores of counter-protesters.

Enrique Tarrio, national head of the Proud Boys, who describe themselves as an all-male "western chauvinist" group, and former InfoWars personality Joe Biggs, organized the "End Domestic Terrorism" rally on Saturday that started at 11 a.m. local time. Initially, the crowds moved in slowly, and were met by a heavy police presence, in which local police were bolstered by more than a dozen other law enforcement agencies.

Members of other far-right extremist groups, including the American Guard, the Three Percenters and the Daily Stormers, were also expected to attend in the hopes of declaring militant leftists, or anti-fascists known as "anitfa," a domestic terrorist group.

One right-wing militia group, Oath Keepers, disavowed the rally for fear of being associated with white supremacists.

"We do not believe the organizers are taking the steps necessary to ensure that white nationalist and suspected white nationalist groups and individuals will be excluded," said Stewart Rhodes, the group's founder, in a statement on its website.

Previous rallies featuring right-wing groups and antifa have turned violent in Portland, a city so closely associated with liberal hipsters it inspired the parody show "Portlandia."

Local authorities have beefed up security and have been joined by an array of other law enforcement agencies "on a scale that this city hasn't seen in years," Wheeler said.

Early Saturday, Trump criticized antifa in a tweet, and said Portland is "being watched very closely."

"Major consideration is being given to naming ANTIFA an 'ORGANIZATION OF TERROR,'" the tweet read. "Hopefully the Mayor will be able to properly do his job!"

Major consideration is being given to naming ANTIFA an "ORGANIZATION OF TERROR." Portland is being watched very closely. Hopefully the Mayor will be able to properly do his job!

- Donald J. Trump (@realDonaldTrump) August 17, 2019The president did not, however, criticize the right-wing organizers.

It was unclear whether Joey Gibson, the leader of right-wing Patriot Prayer, attended the rally. He and five other men have been arrested this month, on charges stemming from a violent outburst on May 1 at Cider Riot, a bar that is a haven for the city's leftists. Videos of the May Day incident show men associated with the group unleashing pepper spray, fighting and striking people with batons.

He turned himself in to authorities and was bailed out on Friday.