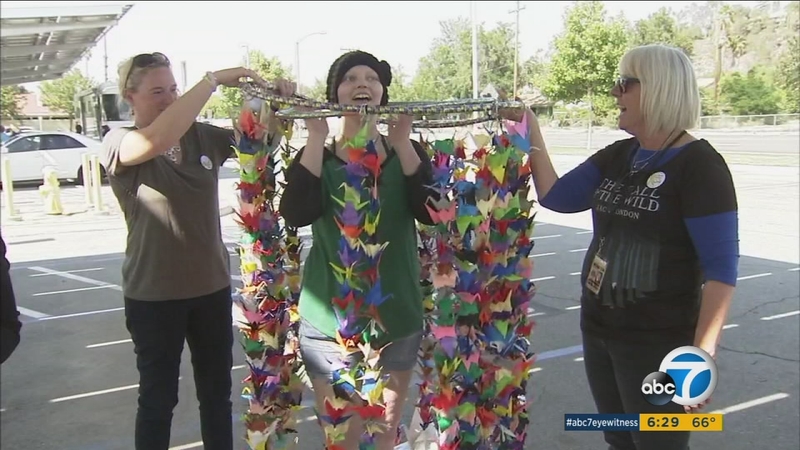 HEMET, Calif. (KABC) -- Hemet High School rallied behind one of its students battling a rare form of cancer by making 1,000 origami cranes.

Her mother said it all started a year ago with a nagging pain.

"Cassi began having, experiencing pain in her left hip," Ellen Tichy, Cassi's mother explained. "It just wouldn't get better no matter what we tried."

Cassi hasn't been able to go to school since she was diagnosed, but she returned Wednesday afternoon so students could present her with 1,000 origami cranes.

The "Cranes for Cassi" was a show of support for the teenager.

"It means a lot, really, that there are so many people supporting me," Cassi said. "I never even knew until now and it really means a lot to me. Just makes me really happy actually."

Cassi is receiving treatment at the Rady Children's Hospital in San Diego. It was there that she and her mother discovered origami cranes.

"I found the idea about the crane while I was just starting this journey with Cassi and I loved the idea that it represented hope and good health and prosperity," Ellen Tichy said.

After learning about the cranes, students decided to do something special for Cassi.

In November, they began a school wide project folding the paper cranes and stringing them together.

"That just shows her that people at school are still thinking about her and still care," student Rylee Thompson said.

Students also participated in a blood drive to help draw attention to the need for blood while patients undergo cancer treatment.

"Just in this experience with Cassi, something she needs frequently is blood and platelets. Both her chemo, trial drug and the radiation have affected her platelets," Ellen Tichy said.

For now, Cassi is focusing on her recovery and on accepting her best friend's invitation to attend the prom on Saturday.